I had been waiting for this year's Ja Matsuri so impatiently that sometime around February that was all I would talk about. The first proper festival of the summer season. Held in a compact area. Relatively easy to observe. Moderately crowded. Friendly. Pleasant.

And then March 11 happened. Two of the most important local matsuri got cancelled. I was afraid that Ja Matsuri would share their fate. Personally, I think that cancelling public events right now is a really stupid thing. We're not exactly in Fukushima, we haven't been flooded by the tsunami, life goes on. How can you convince people to go out, enjoy themselves and entice them to spend money if you take away the traditional reasons to go out and spend money?

Fortunately, Mamada Hachimangu in Oyama, the shrine organizing the festival, seemed to have this figured out, and to my huge relief, Ja Matsuri was scheduled to go on as planned.

We wrote about the history of the shrine and about the event itself last year, so I'm not going to repeat myself. Visit this link, if you're curious. Here's one more.

This year, the weather decided to get pissy and it was cold, rainy and windy. I wasn't dressed appropriately and I was freezing. That's why I'm now sneezing. But at least it wasn't me who had to jump into the cold and filthy pond!

Here are some photos: 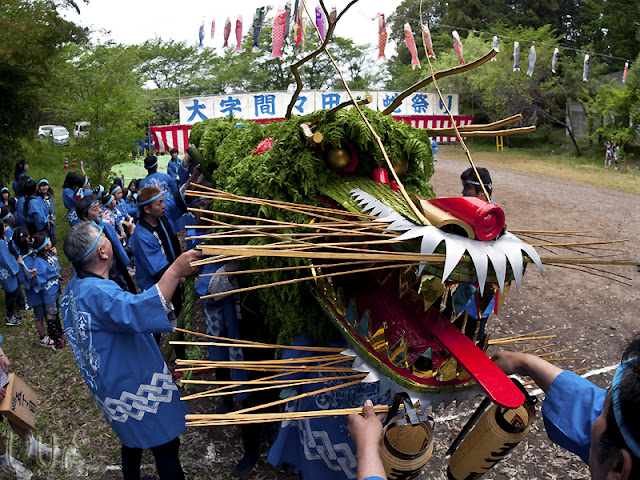 The snakes are getting together before the event. It was all very organized, with sections for each team marked on the ground.

After they all got together, one by one they marched to the main shrine area. 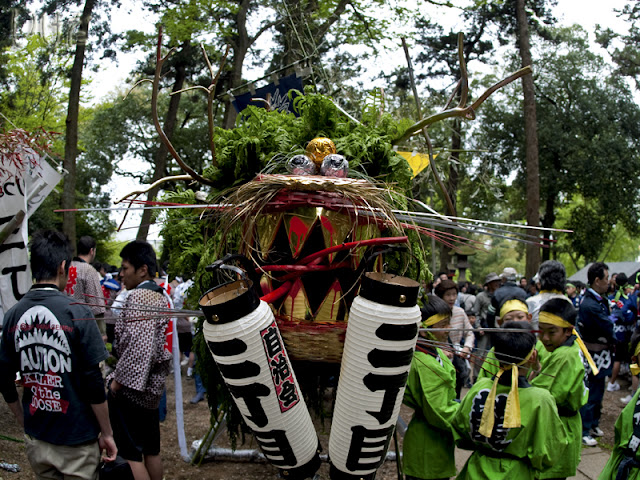 Then came the priest. 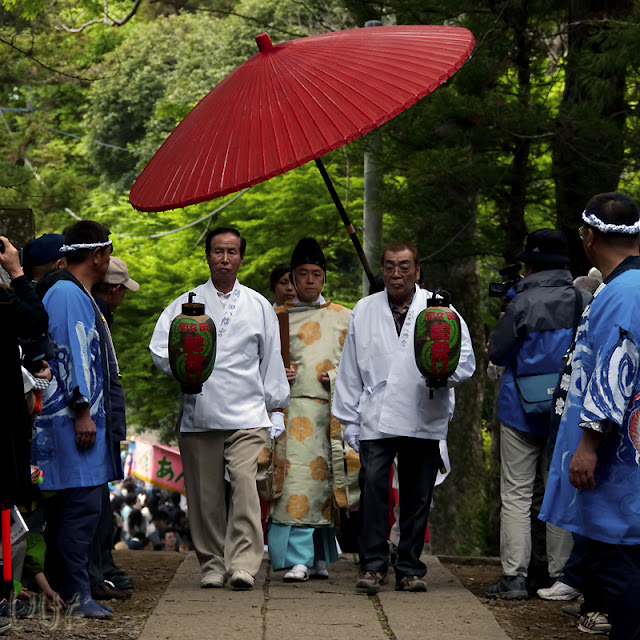 One of his many responsibilities was to offer sake to the snakes. 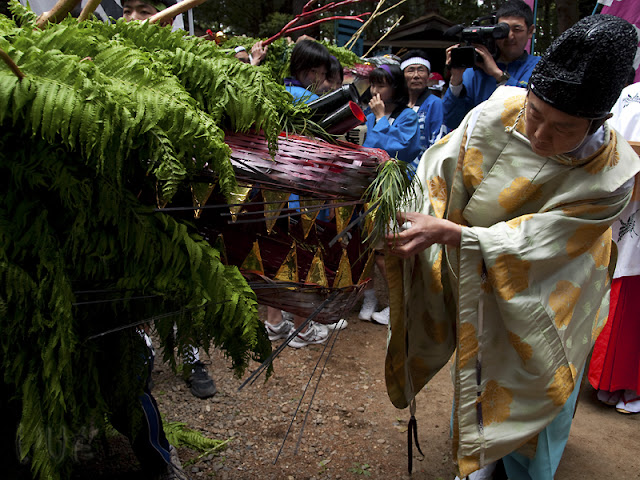 After that, and of course after the religious part of the festival, it was time to get dunked in the pond. The objective was to get the snakes to drink water... 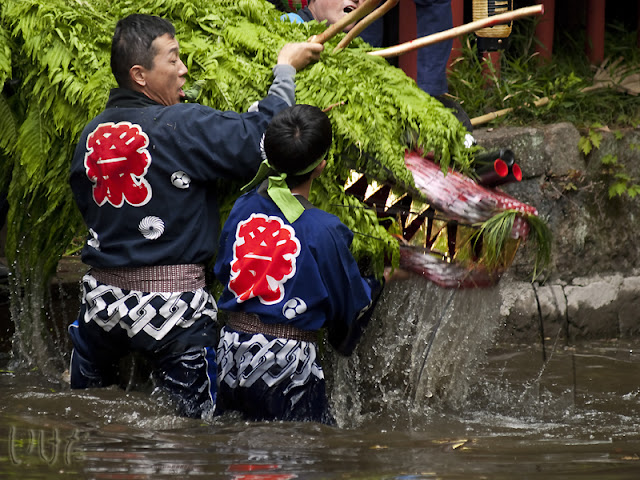 ...without drowning yourself in the process. 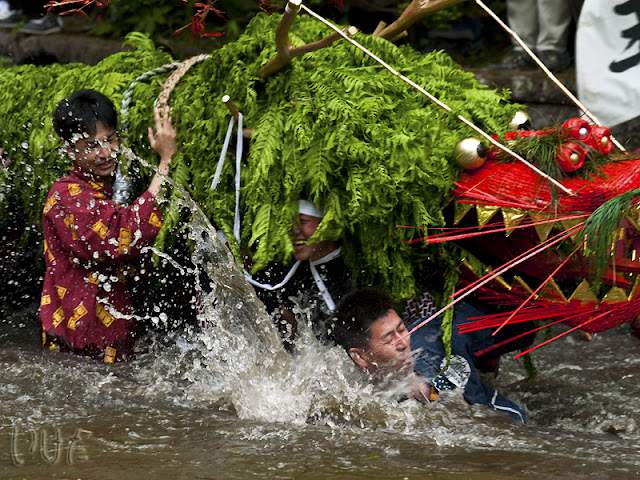 Doesn't look too difficult, now, does it?

And this is my own entry for this week's Show Me Japan.
Posted by 2cats at 10:15 PM No comments:

Our friend from the fabulous Oakland Daily Photo blog wanted to know who organizes a festival like Ja Matsuri. How are the people who take part in the festival chosen and who can participate. 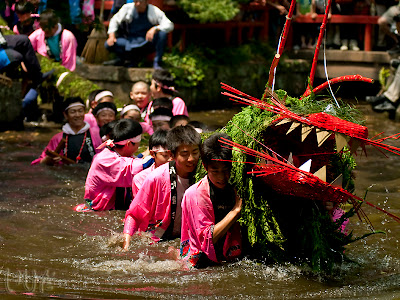 All are very valid questions, and this is what we found out.


Who organizes the ceremony?
Because the Ja Matsuri festival is designated as a cultural asset in Tochigi prefecture, you can be certain that the city of Oyama has something to do with organizing the event. And yes, turns out that the main organizer is actually the Oyama city tourist association. That body, in conjunction with Ujiko members are responsible for putting on the show.
“What’s Ujiko?” I hear you ask. 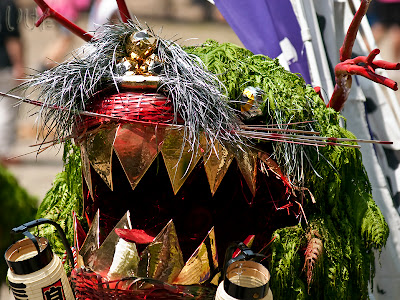 Before taking a dip in the pond

Back in the olden days, Ujigami was considered as the ancestor of local power. Ujiko are its (his?) offspring and relatives of the clan who worship the same Ujigami. So basically Ujigami is a mythical superhero (something like a patron saint, I guess) of the clan, and thanks to him, the clan has an important name, wealth and influence. Or at least, that’s how the story goes.
Every shrine has Ujiko members, and such members in Oyama, along with the tourist office are responsible for organizing the ceremony. 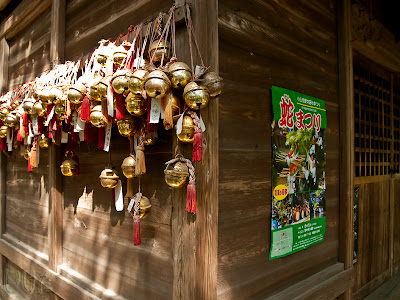 Poster for the festival

The shrine’s part is to engage not only in religious services, but also to include public and social aspects of the event, somewhat similar to what you could expect a community center to do.
And the tourist office job is to energize the local area by getting involved in organizing ritual ceremonies to make a buck. Because, let’s face it, at the end of the day, it’s also about money – the money that people attending such events so willingly spend.

How are people chosen to participate?
Young boys and girls in each district, who are taught by some old dude how to make the snake, are chosen to dip themselves in the filthy pond. I guess it all depends on whether their parents are willing to participate as well. The rest is all about connection. You know someone who’s doing it, and you’re asked to do it too. 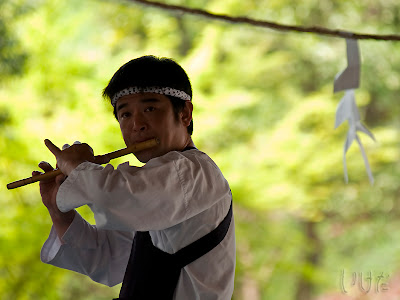 When it comes to traditional Japanese music (taiko drumming and such), there are groups that preserve traditional instruments and teach the young ones to play. Again, kids are encouraged to participate and participating carries with it instant respect and prestige.

If this festival is like many others in other cities, then members of public services (like local fire department guys and their families) are also drafted into participating. Sometimes, they do it as “volunteers” and sometimes they get paid. It all depends on how determined any given district is to appear “involved” and prestigious. 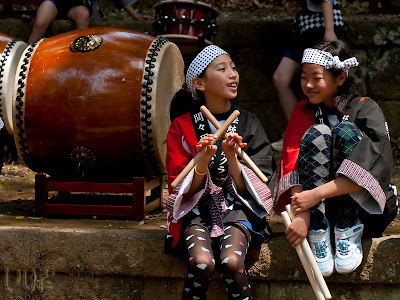 Is it an ecumenical event or do only "shintoists" participate?

Personally, I'd take the apples: 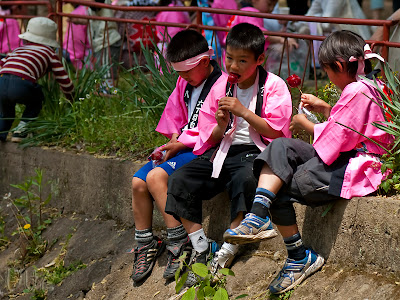 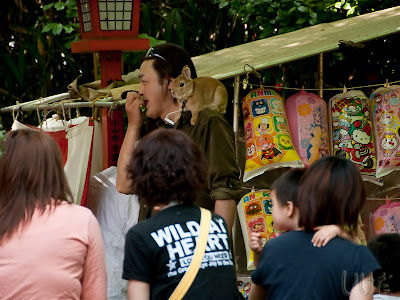 Or even a poor turtle, who no doubt thinks "Shit, I better get out of here before the crazies invade my pond": 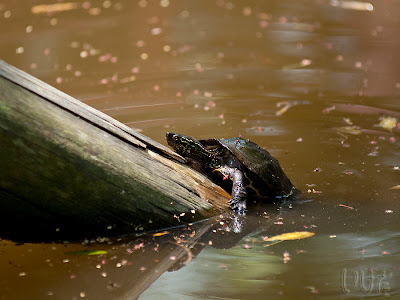 Part one of our report is here.

Today was Children’s Day and the last holiday of the Golden Week. And since the weather was lovely, spending the last day before returning to work tomorrow would be pointless, Dr. and Ms Trouble got in their trusty, little k-car and zoomed down to Oyama to take a look at this festival.

And continuing with our tradition of presenting obscure local festivals, here is our report from Ja Matsuri. 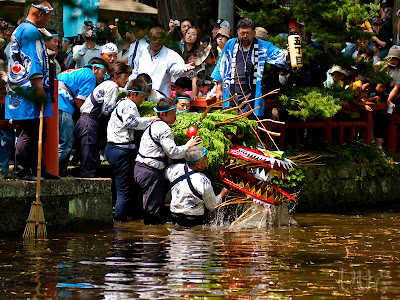 The 15th ruler of Japan, Emperor Ojin (the dude enshrined at Hachiman Jinja) appears in the collections of Japanese myths (Kojiki and Nihon Shoki) as Homutawake, or Hondawake (誉田別). This legendary emperor spent three years in the womb of his mom, Empress Jingu (神功皇后) - that must have been some pregnancy, I feel sorry for the woman, legendary or not. He was crowned at the age of 71 and reigned for 40 years until his death when he was 111 years old (or 130 years according to Kojiki). Yep, it’s a myth. Either that, or the guy and his momma were extraterrestrials. Hey, anything is possible…

Where is Mamada Hachiman Jinja?

It’s approximately 72km from Edo (old name of Tokyo), located along Route 4. Route 4 used to be called Nikko Kaido (日光街道). Yes, Route 119 is also known as Nikko Kaido – it’s the second section of the ancient road from Edo to Nikko. Among 21 stations located along this religious route, Mamada is number 11, and you’re supposed to arrive there on day 2 of your pilgrimage, by foot, naturally.

In fact, the legendary poet, Basho MATSUO (松尾芭蕉), spent the night at Mamada while on the way to visit northern parts of Japan. He wrote a travel book of haikus titled “Oku no Hosomichi" (奥の細道/ The Narrow Road to the Deep North). A monument celebrating one of his haikus is located at Mamada Hachiman Jinja.

Click on the map for larger view (sorry, it's a static jpg shot only).

The name of Mamada Hachiman Jinja appears for the first time in 939 CE (AD if you prefer) when Masakado TAIRA (平将門) rebelled against the Kyoto Court by proclaiming himself “Shinno” - new emperor - 新皇.

Hidesato FUJIWARA (藤原秀郷), the Tochigi governor at that time, was ordered by the Kyoto Court to deal with the Taira fella. On the way to fight with the rebels, he stopped by at Mamada Hachiman Jinja to pray for speedy victory. After Hidesato’s arrow hit Masakado right in the middle of the forehead (bullseye!), the victorious governor returned to Mamada Hachiman Jinja, reported his triumph and donated a rice field (田) to the shrine.
Since then, the local people called this area “Mamada” (飯田). During the Edo period the kanji of Mamada changed from “飯田” to “間々田” because Mamada is located between (= 間) Edo and Nikko.

In 1189 CE (AD, whatever) Yoritomo Minamoto (源頼朝) heard of Mamada Hachiman Jinja’s divine power in aiding Hidesato’s famous bullseye arrow. So he, Yoritomo, also thought it would be a good idea to visit Mamada and pray for victory over yet another Fujiwara, this time - Yasuhira FUJIWARA (藤原泰衡), the 4th successor of Northern Fujiwara clan (奥州藤原氏) in Mutsu Province (陸奥国). But instead of donating a rice field, Yoritomo planted a single pine tree. Cheap bastard.

During the Kyowa era (1789-1803), the shrine burned down to nothing and the current buildings are reconstructions done in 1851 by some highly-skilled carpenters who were fixing Toshogu (in Nikko) back then. So when you happen to visit Mamada, you might as well pay attention to the decor of the shrine buildings - they have a very prestigious pedigree. 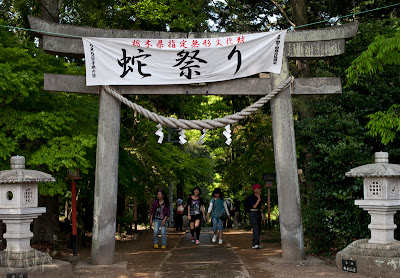 What the heck is Ja Matsuri (蛇祭り)?


“Jagamaita!” the kids screamed while carrying an over 15 meter-long snake made of bamboo, straw, vine, and fern. Mamada locals, children and adults alike, sacrifice over a month of their time and effort to construct this beast. Several such beasts, in fact.
Back in the ancient days, the festival was called “Jagamaita”, since that was the phrase repeated over and over while parading the snake around. Now it’s simply known as Ja Matsuri – a snake festival. 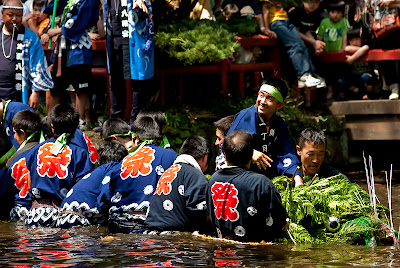 This festival has its roots as a ritual ceremony that took place at the time of planting rice (though now the event is celebrated on May 5th), wishing for rain and wind to keep bugs and disease away from rice fields. Snakes from each Mamada district get together at Mamada Hachiman Jinja, are purified by oharai (お祓い), and drink pond water (as filthy as the pond in New York’s Central Park). Then while still soaking wet, they go for a walk and drool around their local neighborhood. 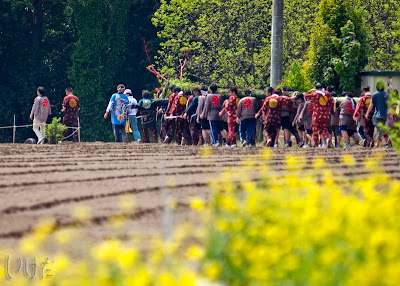 Walking around with the snake 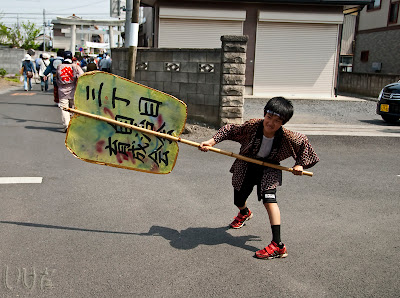 Tochigi prefecture assigned this festival as a cultural asset.


It is considered as one of the more odd Shinto festival in Japan. No need to explain why. Watch this video and have fun!!!


And a few more photos are here - on our photoblog.
Part 2 of our posts about the festival is here.


PS. And yes, I know what "mamada" is a slang term for in a certain European language.