On the way there I was listening to the radio. Radio Berry had a special correspondent at the movie theater doing a live report. Yes, the movie is going to start in less than 1 hour, he said. Let's talk to the people who are waiting to see it, he said.

And so on... All the way to Interpark. 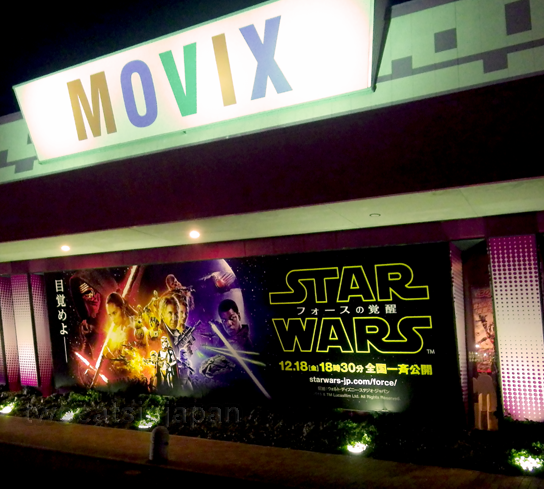 I got my tickets last month. The minute they went on sale I was ready with my credit card furiously punching in the numbers. The system hang up on me several times before I finally managed to select my seats. By then the bestests seats were already all gone. Took less than 3 minutes. Damn. People were fast!

I don't blame them though. The first show on the first day! If I wanted to be there, surely, hundreds of others felt the same.

Our tickets were ok. Not where I would normally choose to sit, but right next to it. 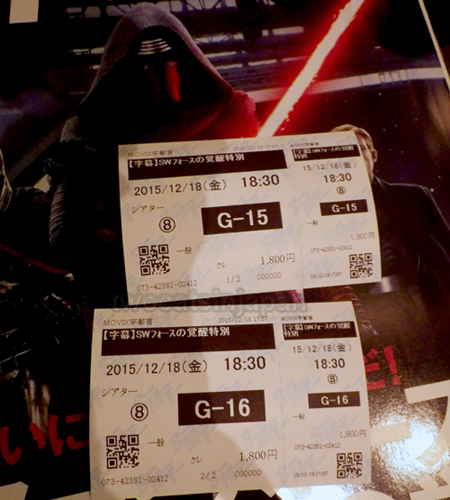 You see, normally I am the kind of person who loves spoilers. I read spoilers of new releases, I ask to be told what happens during a movie, if a person I'm watching it with already knows the story... I've been known to storm out of the movie theater, because one time the jerk I was with refused to tell me what happens next. That is the surest way to infuriate me during a movie...

But... This time, I skipped all that. I don't know how I survived.
I wanted to see this movie with virgin eyes.
Because Star Wars...

But before the screening I stubbornly waited in line to get a special memorial book, only available on the first day. The women working behind the counter were so slow that if they were doing it any slower, they'd be going backwards. 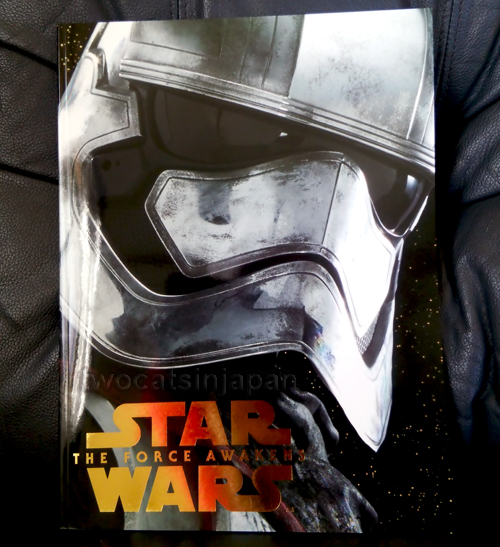 People waiting in line were getting frustrated. The announcements over the speakers kept telling us to be in our seats before 6:30PM, because the movie was going to start promptly at 6:30, with no previews or ads.

We decided to separate, I stayed in my line, and my friend went over to the concession counter to get us popcorn. Suddenly she calls me on my cellphone all very excited asking if I wanted a special character drink cup.

Duh, what a stupid question, of course I wanted one.

She then proceeds to ask me which one I want. And then she gets a nervous breakdown trying to pronounce the characters' names. There are 4 cups, she says, but even with katakana (Japanese script used for foreign names) she can't manage it.

I ask for Kylo Ren. Or rather, for Kai Ro Ren to make it easy for her.

She was a great trooper and got the correct cup. Yay!

In the meantime I decide to get some souvenirs as well. Another mug cup, of course!

Here they are, both of my Star Wars cups: 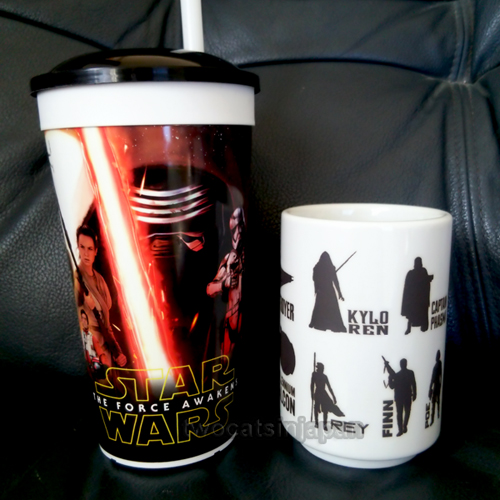 
We made it to our seats with literally 30 seconds to spare. But with drinks and a giant popcorn to share. What! Gotta watch Star Wars in style! 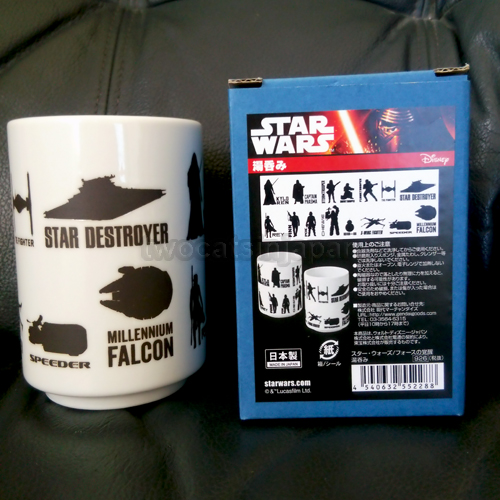 The white mug cup is made in Japan.


(There might be spoilers below, continue at your own risk).


So, the movie starts and I get this strange feeling in my stomach that I've seen it somewhere before...

Yep. It's all there.

If that sounds like a summary of Episode IV - A New Hope, that's correct.
The Force Awakens is basically A New Hope retold.

It's a good movie. That's for sure.
But is it a great movie? Nope.

We've all been there and done that and seen that. If you're longing for the old and the familiar, it's all there. Rehashed, retold, reheated and watered down for the young ones who didn't grow up on the original trilogy.

I did and I am disappointed.

But at least I got me a cute towel: 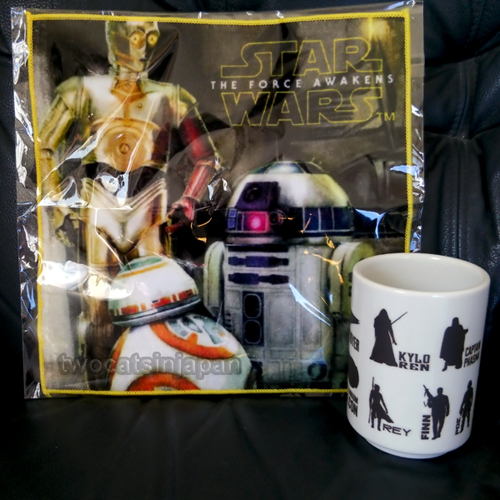 There are logic lapses so huge that you could fly the entire Resistance fleet through them.
The villains, the New Order, have the combined IQ of a stool sample. They are typical Disney cartoon bad guys, totally over the top and with absolutely zero substance. I can't believe that all those professional movie reviewers couldn't see that.

When you think about the original trilogy, when you mention the words "Star Wars", what immediately comes to your mind?
Darth Vader, that's who. 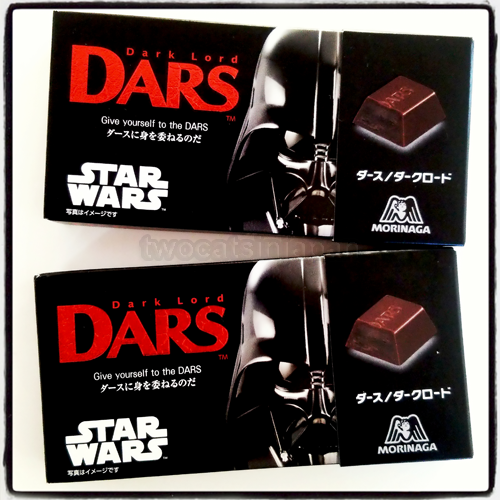 In Japanese "Dars" and "Darth" sound the same. Dark chocolate. Dark side. You know this was one snack tie-in just waiting to happen. (Dars is usual the name of this snack).


The guy had enough charisma for an entire galaxy of bad guys. Kylo Ren is an annoying pipsqueak in comparison.

And his henchmen? A band of amateurs.

With all their technology and resources, they still don't implant nano-tracking devices in prisoners or soldiers? C'mon, JJ Abrams, you can't be serious. That's Totalitarian Regimes 101.

Oh wait! But if they did, then the movie would have been over in about 15 minutes. I gotcha!

The inside of the premiere day memorial book: 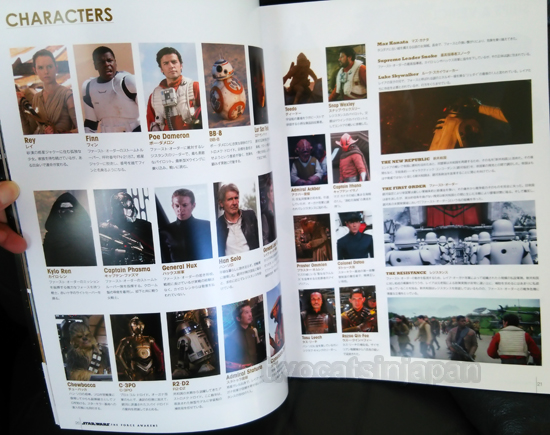 The new wunderkind, Rey, who I'm pretty sure is going to turn out to be Luke's daughter in the next episode, is likable enough. But just enough. Her ability to be awesome at seemingly everything, from starship engines to using the Force is so Disney, it makes my stomach turn. If I wanted that, I'd watch Cinderella, or Beauty and the Beast, or something...

So yeah, that's my beef with Star Wars The Force Awakens. 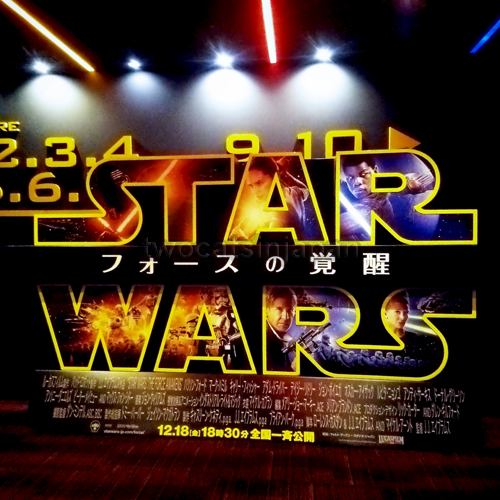 Even before I saw it last Friday, I was already making plans to see it again in 3D in Tokyo. Now I'm not going to.
It's not worth it.


Now, if you excuse me, I have some snacks to eat: 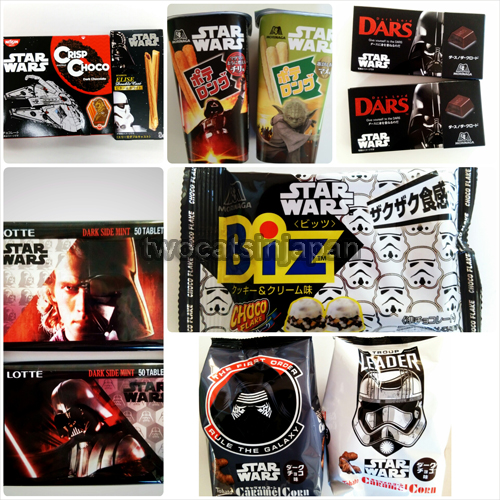 And the original trilogy to watch one more time.