Yasukuni on the 70th anniversary of the end of WW2

I had no plans to go to Yasukuni shrine this year. No plans at all.
August 15th was a Saturday and I wanted to stay home, sleep until noon and do nothing at all.
Read a book maybe.

And yet I went after all. 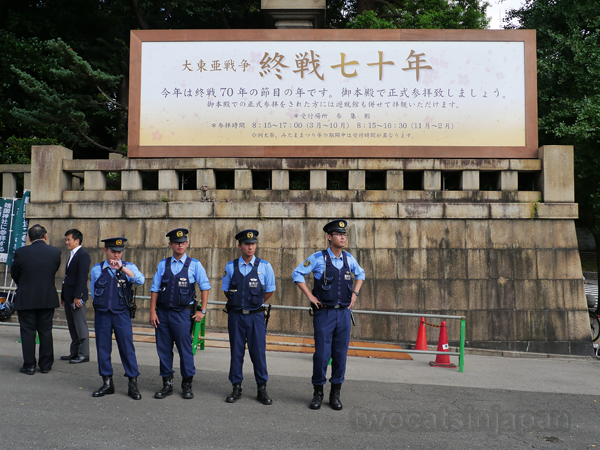 There is a group of ladies that likes to meet and visit shrines and temples and collect goshuin. Goshuin are red temple or shrine stamps that are stamped in a special book called goshuin-cho. You can also get them on loose pieces of paper, and you can make your own goshuin albums.
Usually, they cost anywhere from 300 yen to up to 500 or 600 per stamp.

And yes, you guessed it, that group that collects goshuins that's me and my friends. Most of us have two goshuin books, one for shrine (shinto) stamps, and one for temple (Buddhism) stamps. Yes, we are real goshuin otaku.
Sometimes we go crazy and do a stamp rally. We try to visit as many shrines and temples in one day as possible. And of course, we get our stamps.
Our record was 17 stamps in one day in Nikko. Man, that was painful. 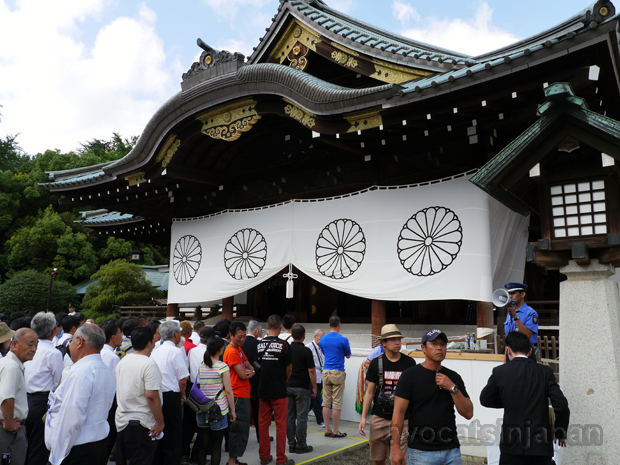 People lining up to pray at Yasukuni shrine on August 15th, 2015.

You see, getting a stamp is just half the fun.

The real big deal is to get the stamp on a special day.
For example, at Toshogu in Nikko you'd want to get your stamp on the day of the Thousand Warrior March during the Toshogu Spring Festival.
Important dates, anniversaries of special events, and so on, are the ones you want to aim for to make your goshuin extra special.

So yes, at Yasukuni (the controversial shinto shrine in Tokyo) that date would be August 15th. The day marking the end of WW2 in the Pacific.
I got my shrine stamp last year on August 15th. I even bought a goshuin book at Yasukuni last year. 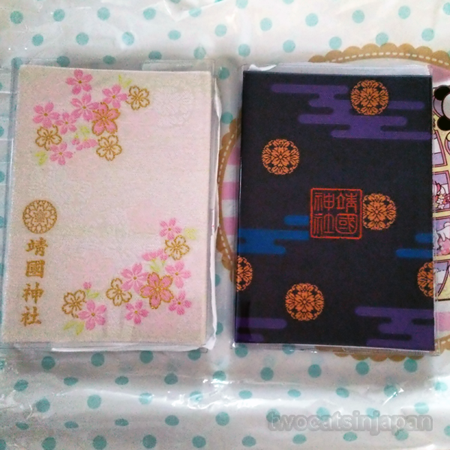 There are two designs of goshuin books available at Yasukuni shrine.

So why did I go again this year?
Because last year was the 69th anniversary. Not special enough.

Yep, the ladies insisted we had to go this year.
And so we went.

Taking the first train to Utsunomiya was painful. I almost missed it.
We wanted to catch the 5:59 train to Tokyo. We barely made it. Once on the train we slept like drooling zombies.

We got to Yasukuni right around 8:30AM. It wasn't that crowded. Not yet. 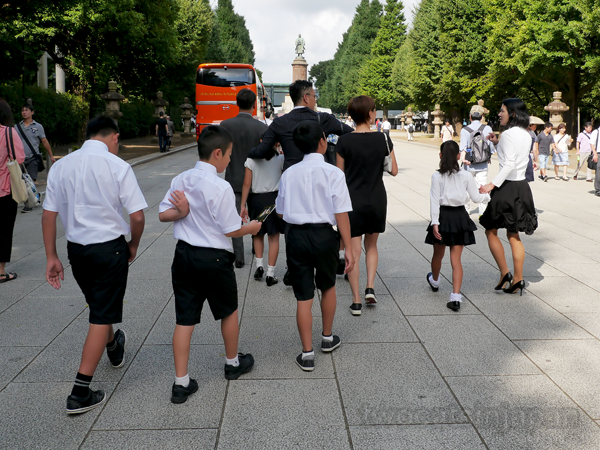 Some people came dressed in whatever: 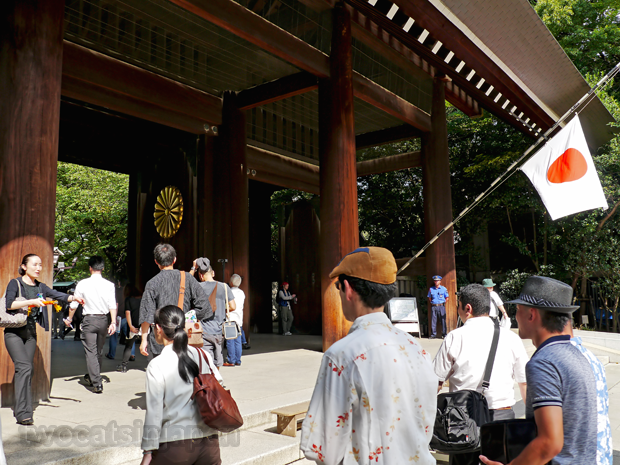 While my friend got in line to pay her respects and pray for world peace, I got accosted by two journos.

There were plenty of press and TV people, as always. Waiting for some action, as always.

It all started innocently enough. They asked me where I was from. I told them.
They asked me if I knew what this place was. I told them.
And then they went on a fishing expedition, and just for shits and giggles I decided to play along.

You see, back in the days when the earth was still young, in a far distant land there was a girl whose job was to create fairy tales and make you believe whatever the company she worked for wanted you to believe. Welcome to the world of commercial advertising! We were the bullshit kings of the world. And as they say, it takes one to know one.

The journos were fishing and I let them. They had a story to file, and honestly, the morning at Yasukuni was very uneventful. And what a good journo does when there are no exciting events to report on? He creates one, of course.

They asked me if I knew why it was a special day at Yasukuni. I told them.
We chatted briefly about WW2. Seriously, don't lecture me on WW2. I can outWW2 you any day of the year and twice on V Day. 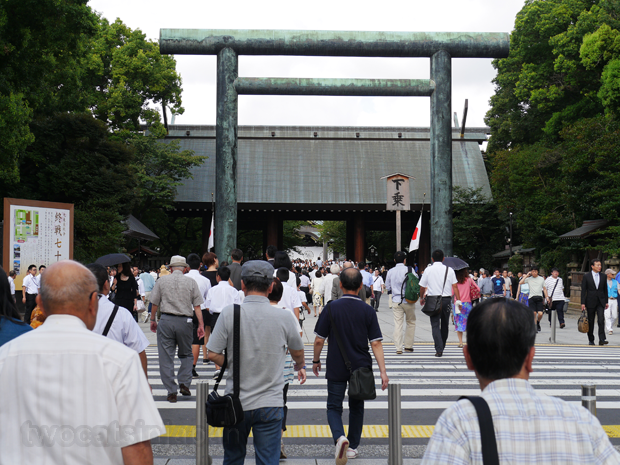 
They started to circle around the topic of why Yasukuni is controversial and wanted to know if I knew why. I told them that yes, I knew. Some of the dudes enshrined there were not exactly the paragons of virtue.
The journos felt they struck gold.
They shoved their mic in my face and proceeded to ask why *I* was there.
"For the same reason everyone else is here, except you, of course," I said.
And that is...? They wanted to know.

'To pray for world peace and the future of humanity," was my answer.

The journos were so disappointed you could literally see the air escaping from their lungs. Like a pair of deflating sex dolls.
They picked up their mics and cameras and quickly went in search of a more exciting interviewee with more news worthy answers. Not even a thank you. LOL.

Oh yes, I know what they wanted to hear.
They wanted to see me righteously foaming at the mouth at the attempts to revise history by the Japanese government, at the lack of sincere apologies, at the controversy of enshrined war criminals. The usual shiz and whiz that is a desperate journo's wet dream. 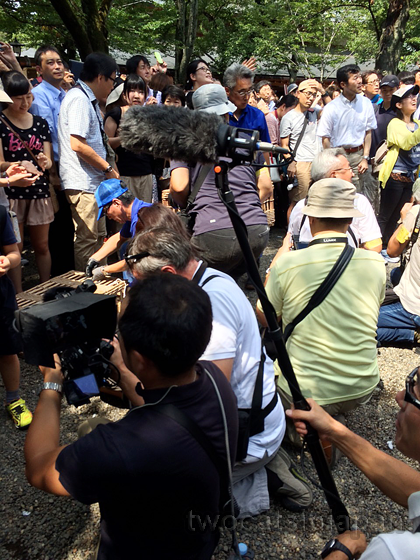 Press waiting for white doves to be released at Yasukuni shrine on August 15th, 2015.

Because just like in the world of commercial advertising where the bullshit makers create your world for you and then make you believe it's true, the reporters create their version of the news and serve it to you as factual facts. And if there is no news to report on?
Then, of course, you gotta make some. Simple as that. Your average journo has about as much "journalistic" integrity as Kim Kardashian. Except that she makes a lot more money than a sweaty guy toting a huge camera on a hot summer day.

And while I was at Yasukuni, I thought I might as well try my hand at the white dove thing.
Every year at 10AM a flock of white doves is released into the sky. Symbols of peace and all that. 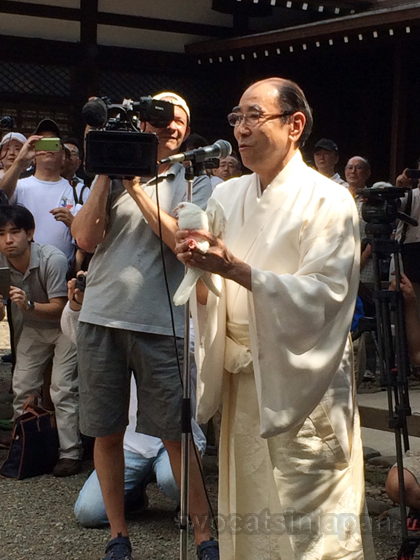 The shinto priest giving instructions - say "arigato" as you release the bird you're holding.

Birds terrify me. They smell and they poop. But this year I was wearing my awesome Hello Kitty arm covers and thought "why not?" Only the tips of my fingers would be touching the feathery beast.

Girls be ambitious. I got my bird. 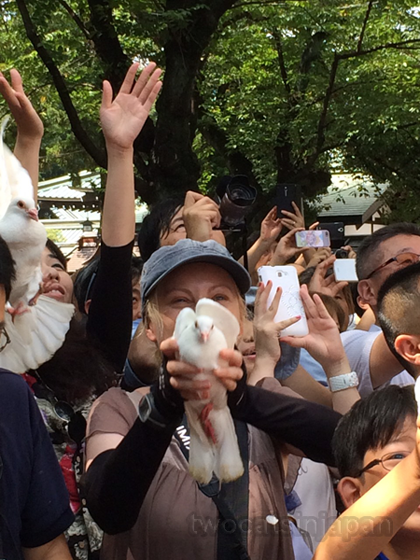 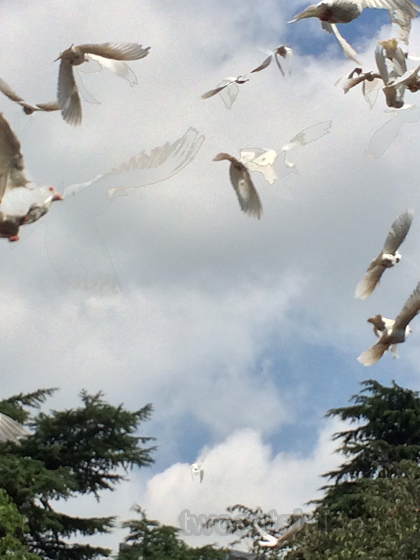 My friend got into the press line with her iPhone and channeled her inner paparazzi. 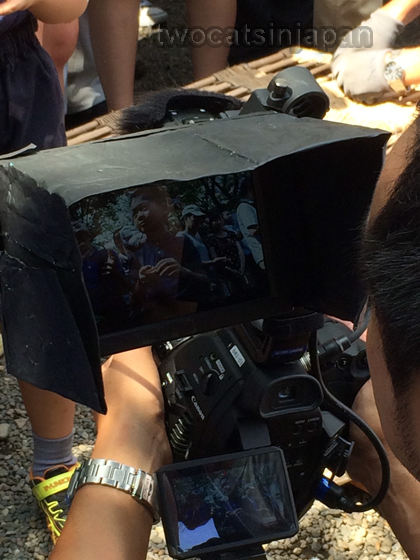 After the bird ceremony it started to get crowded. Really crowded.
When we were leaving the shrine the line to pray was stretching way past the wooden gates and spilling into the sandō. 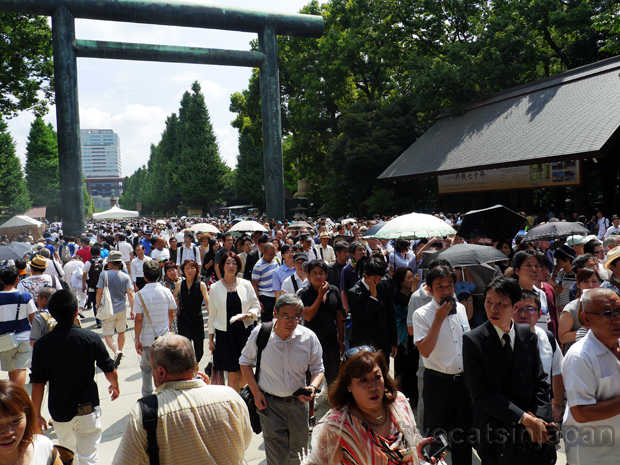 The usual assortment of police vehicles was at the ready. 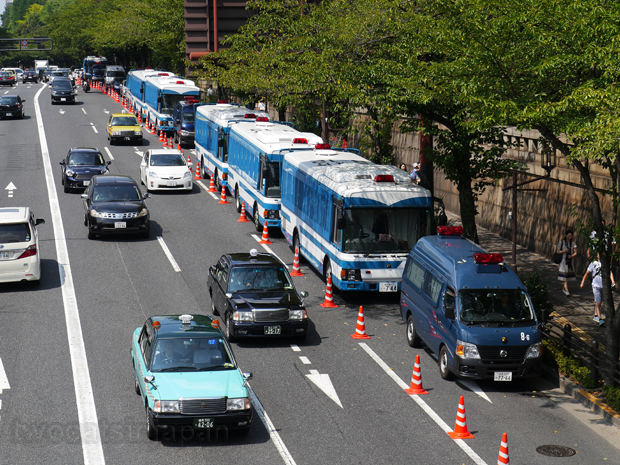 And even more people heading towards the shrine as we made our way to the subway station. 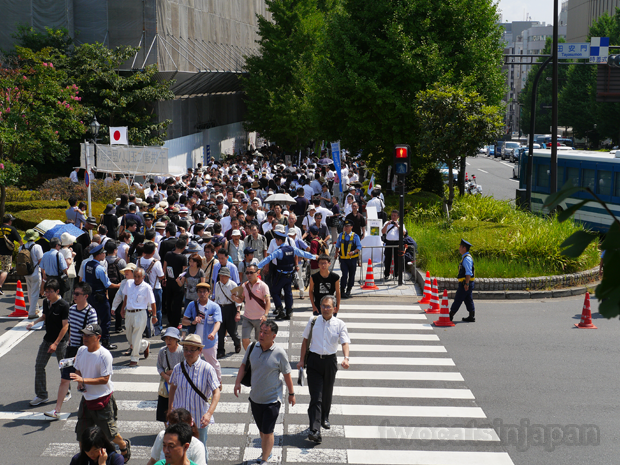 Same as last year. But as it was the 70th anniversary of Japan's surrender, there were more cops, more press, and more people.

This sign on the way to the station caught my eye: 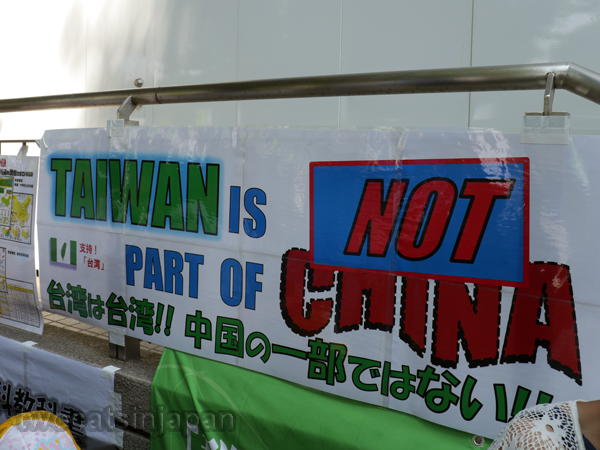 Instead of going directly to the subway stop, we took a small detour (nature was calling) and noticed a different kind of subway. The kind that made us hungry for BLTs.

And sitting at Subway and munching on our sandwiches we watched as the Metropolitan Police Department bomb squad guys and reinforcements arrived. 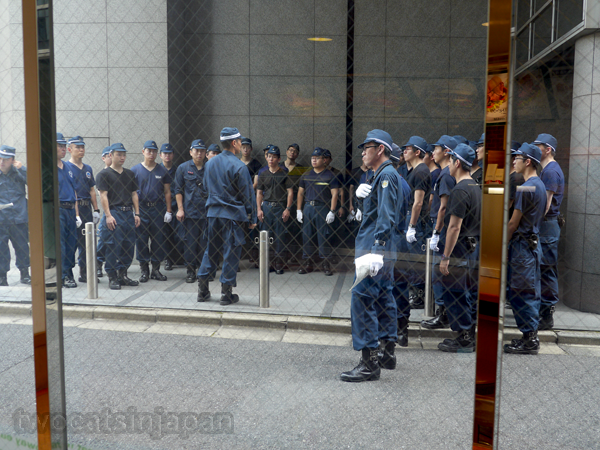 Some were quite good looking and I offered to go outside and ask if anyone was interested in dating my friends. But before I had a chance to play Yente, the cops marched off.

And that was our morning at Yasukuni shrine on August 15th, 2015.


And oh yeah, of course we got our stamps: 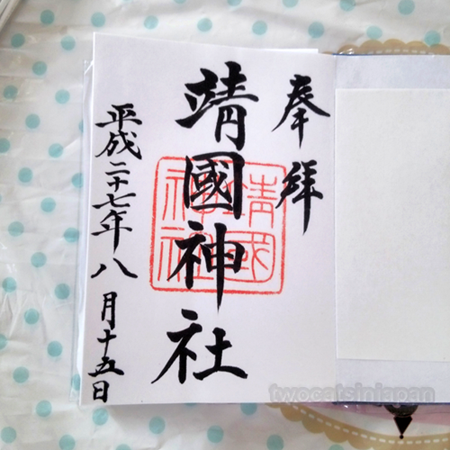 After that, we went to brave the crowds in Asakusa.