Ok, so it's hot. As expected. And humid. Also as expected. And our living room aircon is still dead. Not as expected. We had two different guys coming and looking at it and scratching their heads, and finally this morning we got a phone call that a third guy will show up this afternoon. Hopefully, he can fix it. Because living like this is driving me crazy. We are all holed up in the bedroom again and the cats are getting restless. And frankly, I can't blame them. I'm getting restless myself. I think I might go to the laundromat later today.

But that's not what I was going to complain about. I mean, write about.

August 15th came and went and, even though we did plan on visiting Yasukuni that day, we didn't. Why? Because somebody (hint - not me) didn't feel like getting up at an ungodly hour of the morning. He opened one eye, mumbled something along the lines of "jdkasdjaskjd too early lshfkajf sleep flksdjldjf too hot", then rolled over and ignored me.

He did make it up to me later in the day by cleaning the entire house top to bottom and taking me out to dinner. To MY favorite place. One that he doesn't like. Hah! Serves him right. And what did I do on August 15th? Stayed in the bedroom, naturally. With the aircon on, of course. With two cats for company.

And we could have witnessed something like that instead: 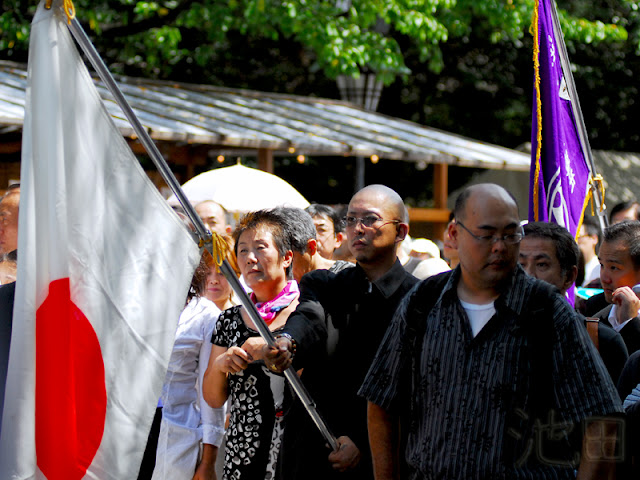 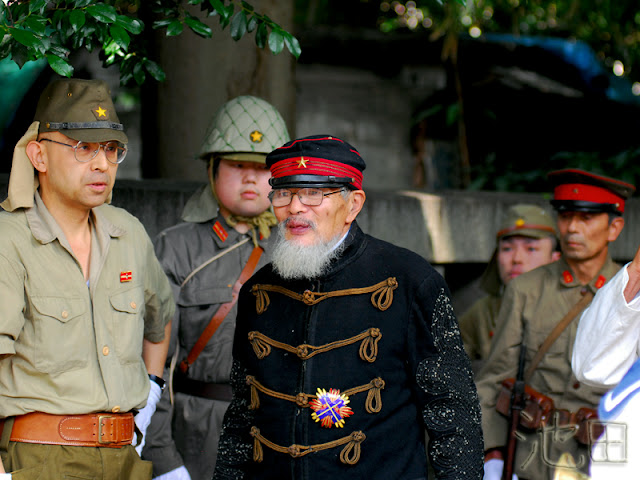 Yes, those are photos from a few years back, but I doubt if much has changed since then.

Instead, I thought today we might revisit Yasukuni on a less crowded day. On April 21st during its annual spring festival - Reitaisai. 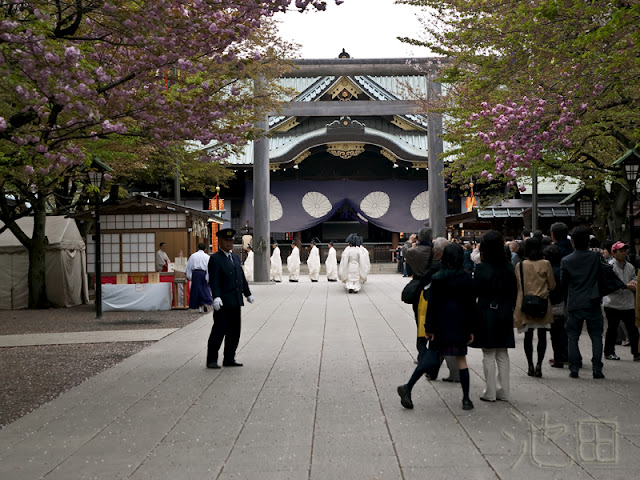 Unfortunately, the season for cherry blossoms was pretty much over by then. Pity. :(


The priests, all nicely lined up, marched to a roped off area to the left of the main shrine building.
There, they did their priestly things: 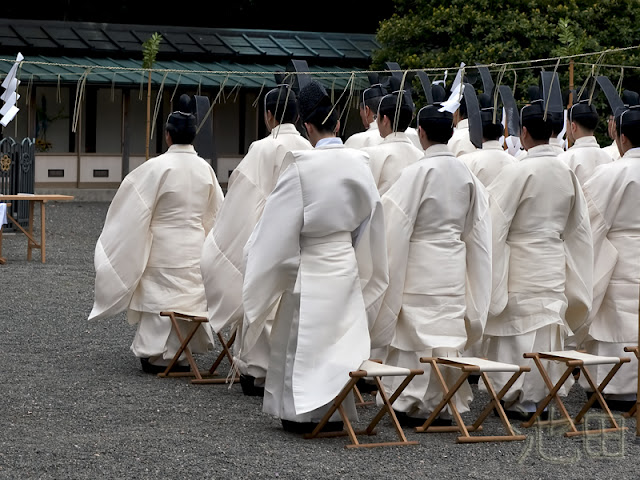 It was all very brief and very compact. After that, they retreated to the shrine.

And what about the small crowd of people who came to watch the events? They milled around aimlessly and most of them moved to the other side of the shrine where an open-air concert was going on. Mellow acoustic music, peace-themed, of course.

Some paid their respects and then left: 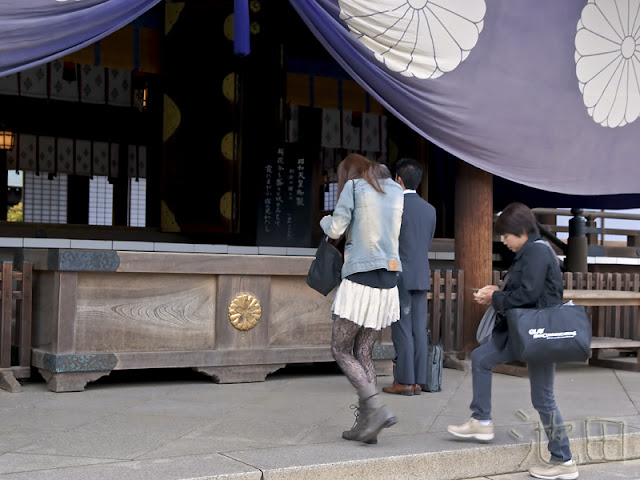 There were quite a few foreigners there that day and they looked visibly disappointed. Not sure what they expected. Riots? Protesters? Demonstrations? Wrong time of the year, folks.

I didn't visit the garden, but I know it's there. And it's quite nice, actually: 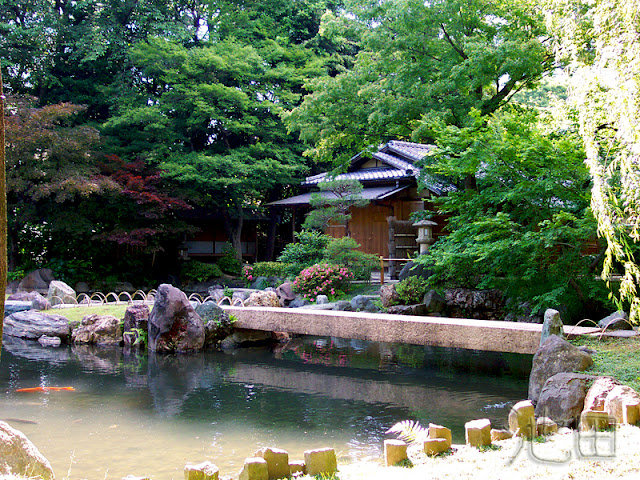 The whole place was very quiet and, dare I say it, even boring. 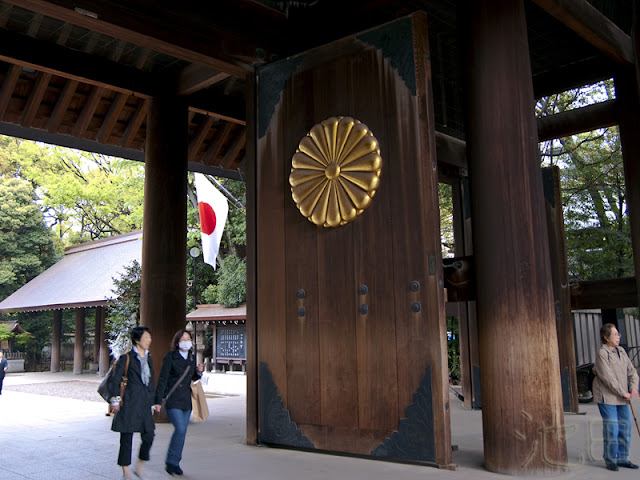 On my way out, I saw this tour bus. How appropriate, I thought: 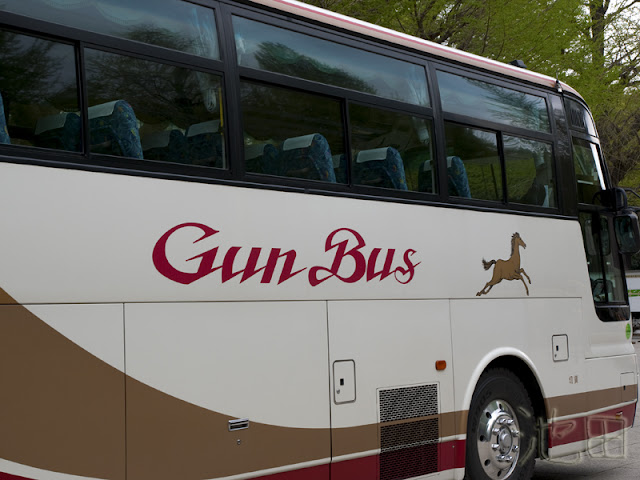 And then I went to look for a toilet and a Starbucks. I found both right nearby the metro station.
Posted by 2cats at 1:42 PM