As can be expected, in the self-proclaimed Japanese capital of gtoza, we take our gyoza very seriously. So seriously, that every November we throw a mega dumpling party - Gyoza Matsuri. 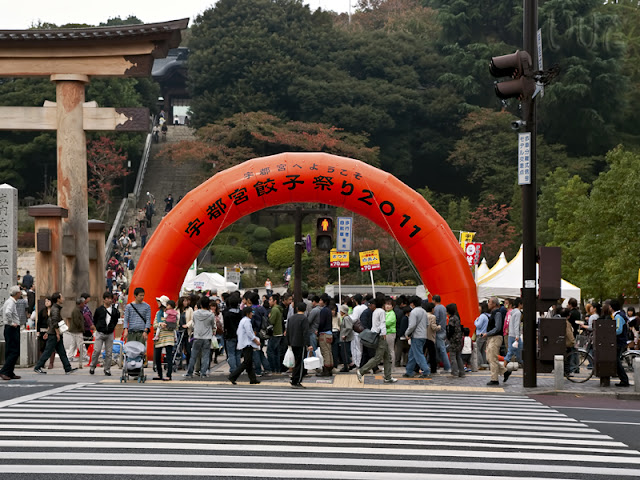 This year, of course, was no different. Except perhaps, that unlike in previous years when the weather was quite nice, this weekend it was cloudy, cold, and today - rainy.

Yesterday, however, it didn't rain (it tried though, boy, did it try!) and together with a friend (because Mr T was otherwise occupied), we headed downtown to eat, drink and be merry. Actually, we skipped the drinking part and just focused on eating. And being merry, of course. 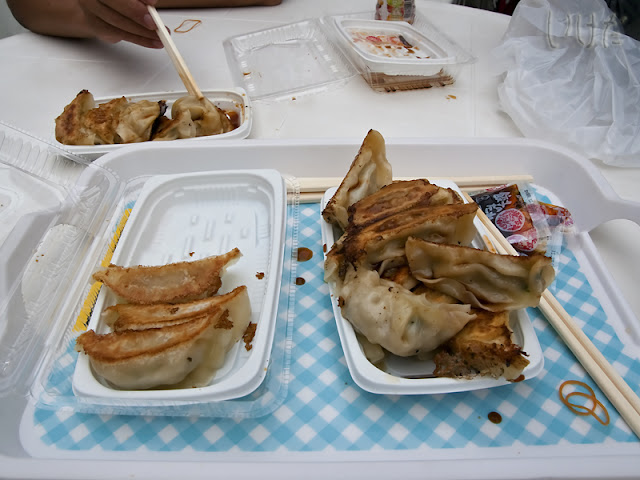 This year no video for you, because... Well, because I didn't feel like filming. And besides, if I had been filming, then you would have to wait probably until next November to see the clip, because I'm so slow these days. I still have tons of summer footage that is unedited and clogging up my hard drive. Yes, I've become that lazy. 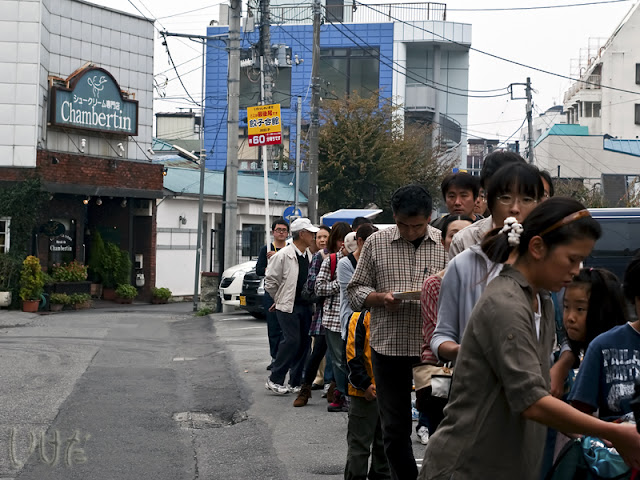 An hour wait for a serving of gyoza? Yep.

But anyway, it was supposed to be about gyoza, not about me. Though admittedly, I'd rather be talking about me, because I blog so infrequently now, that y'all must be just dying to hear what's new at Casa Trouble. Right? To be honest, nothing's new. So there was nothing to blog about.

Anyway, back to gyoza... 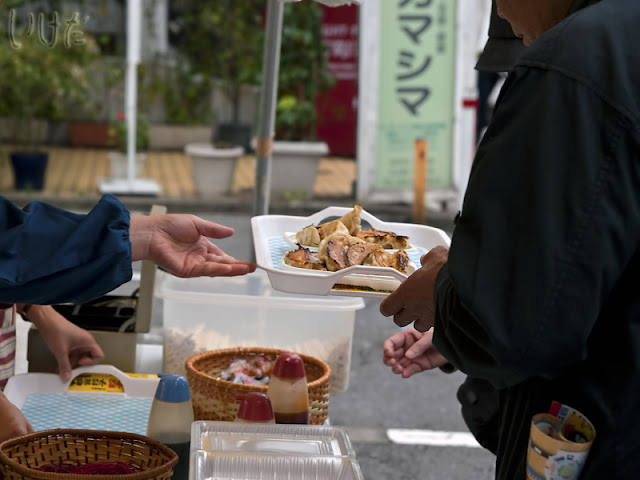 There were many kinds - green, yellowish, steamed, fried, oily, less oily and not oily at all, garlicky, salty and totally tasteless ones. 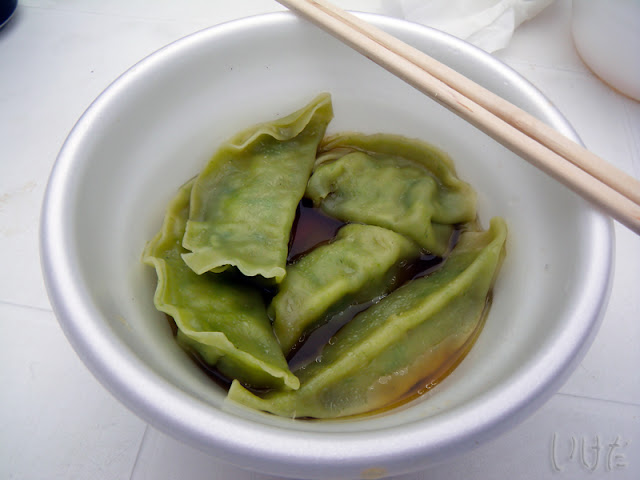 I actually quite liked this one - the soupy sauce (or was it a saucy soup?) was deliciously sour and tangy. I like sour.

And as always, there were other feeding options as well. Grilled meats, sausages on a stick, fish on a stick, yakisoba (which turned out to be yaki-spaghetti) and other stuff. 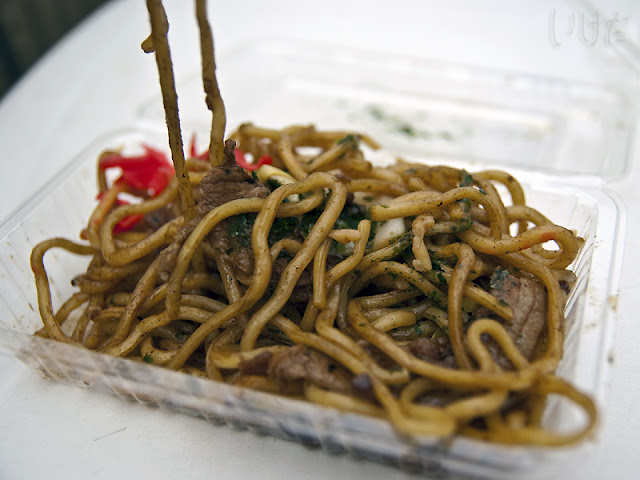 We mainly stuck to gyoza and I can proudly say that I consumed 48 pieces, in total. And was able to get up from the flimsy plastic table and walk to the nearest bust stop when it was time to go home. Needless to say, there was no dinner for me last night. I did have ice-cream, though. Because no matter how stuffed you are, there's always room for ice-cream, amirite? 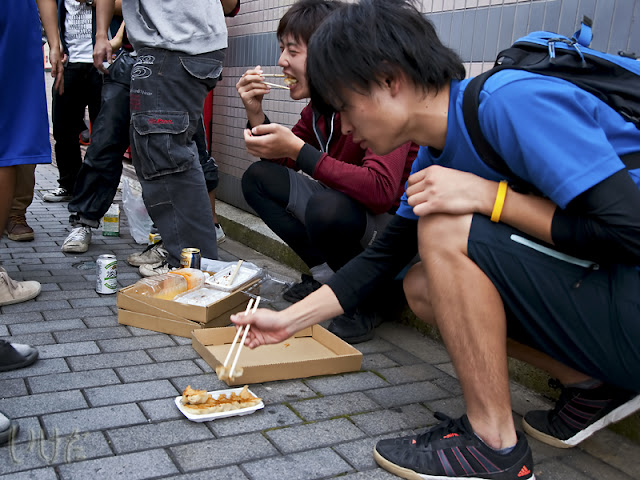 These guys here didn't even bother with a flimsy plastic table.

What else? There was jazz. Because Utsunomiya wants to be famous for jazz. LOL. And LOL again. But in all seriousness, these guys were actually pretty good. 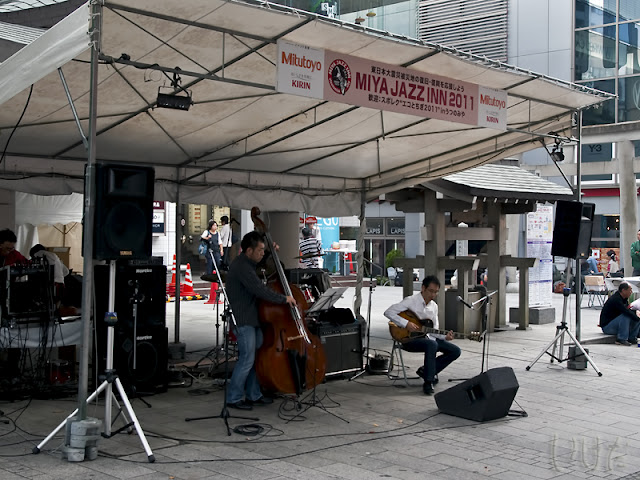 I especially liked their version of "Moon Over Bourbon Street". I liked it so much that suddenly my mouth just popped open and the lyrics came out. Spontaneously and terribly off key. For some very strange reason, this is the only Sting song that I know all the words to. And no, I'm not a vampire fan. Never was, never will be.


And as always, our dear Ichijo boys and girls were on cleaning duty. And seemingly ALL of them wanted to practice their English. What's happening to the junior high crowd these days? I remember them to be all shy and awkward, and here they are, talking to a random gaijin in English. 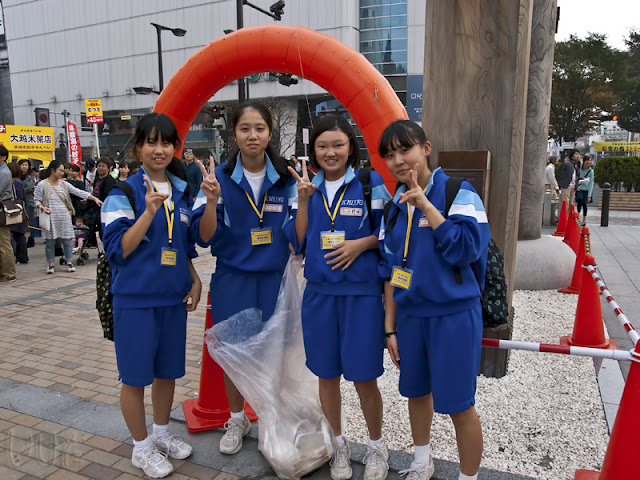 So yeah, that was our Gyoza Matsuri this year.
Posted by 2cats at 4:51 PM No comments: