Because this post is going to insult the intelligence of 99% of my new readers (those who came here via links from various sites in recent days), do yourself a favor and don't read any further. And if you do, well, that's your problem. But consider yourself warned, OK?


Not sure how it all started, but somehow it did. Somewhere, someone dug out my old post about Kayabukiya in Utsunomiya (the skanky place with monkey waiters) and the video (very shaky and grainy and low quality) I filmed there suddenly went viral.

The fact that "Turning Japanese" also featured Kayabukiya around the same time certainly helped as well. But I wouldn't know that. I don't watch "Turning Japanese".
"Can Justin Lee Collins unravel Japan's cultural cliches?" the program's website asks? Ehhh... no... So why is he even trying in the first place, I don't know. But I guess that's what professional attention whores do when they are lacking original material - they come to Japan and all is good in the world again.


Anyway, where were we? Ah yes, monkey waiters. At your service.

That post has lived in utter obscurity on my blog for almost a year. And then, in the wake of "Turning Japanese", some genius figured out how to use google and the monkey shit hit the net.

First it was some sci-fi website with a "Planet of the Apes" reference. It was all downhill from there. Hell, we even made the news on FOX2 in Detroit - must have been a slow news day in Michigan, or something. The rest is history.

My inbox has been clogged with mostly not so nice messages calling me an animal abuser for filming that clip (and you, my dear correspondent, have the IQ of a stool sample, because you didn't even bother to read my original blog post).

Those in need of heavier artillery called me an effing c*nt (honey, you have NO idea! I could teach a master course in the subject!).

But most just settled for the old and tired "f*ck Japan" schtick and petty insults. And the really kind ones limited themselves to the even more boring (if that's at all possible) "WTF Japan!" bright-eyed, bushy-tailed attitude, probably thinking they were being so cool and hip and all sorts of speshul.

After the first 50 emails it started to get old and I took a nap. It was a good nap, too, because I've been feeling kinda fluey lately. 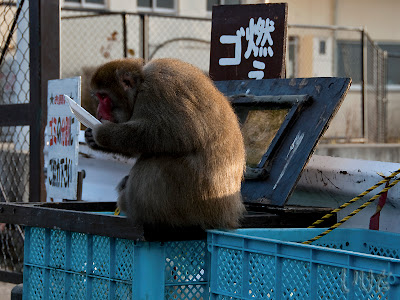 That so many people in the world were stupid, I knew. But that they were even stupider than I thought, well, that kind of surprised me. I must have lowered my standards in my old age, or maybe I simply got too lazy to care. But the sheer volume of stupidity caught me by surprise.

Just like the next person, I enjoy my share of stupid. That's why I write this blog, duh! But what I don't enjoy is self-righteous horseshit from people with a moral superiority complex. Though even that can be hilarious in small doses. 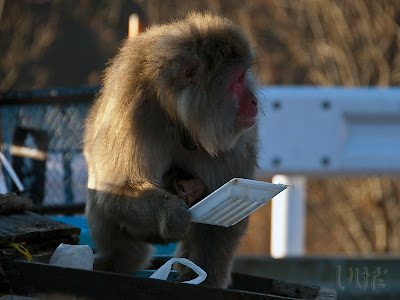 Out of curiosity, and because my flu meds finally kicked in, I divided the stupidity based on the country where the emailers' ISP were located. I'm too lazy to make a pie-chart, so here it is in written form: 87% - the U.S.A. (you go boys and girls! make your mommas proud!), 7% - the UK, 5% - Canada, 1% - all others.

What's my point here? No point really, I just like the sound my fingers make when I type, that's all. It makes me feel busy and important.

But back to whatever it was we were talking about. Ah yes, the stupid. 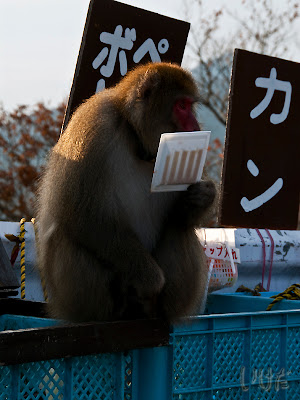 Yum, your garbage is delicious!


What all those PETA lovers and Japan WTFers completely missed is this:

It really amazes me that I have to spell it out at all. Yes, some people are THAT stupid. 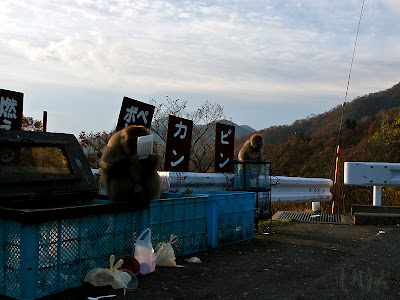 Hurry! The garbage truck is right around the corner!


For those who think that being a wild monkey is so grand, I'm including in this post a bunch of photos taken during my early morning drives in Nikko.

Oh, the smell of monkey freedom! How wonderful! Scavenging for food in garbage bins behind convenience stores and fast food places. Licking clean day old yakisoba containers. Eating rotten food no longer fit for human consumption. Tooth decay, disease and even cancer (yep, human food can do that to you). There was an article in local press recently about the sorry state of Japanese wild monkeys and their health problems, a very sad story indeed. 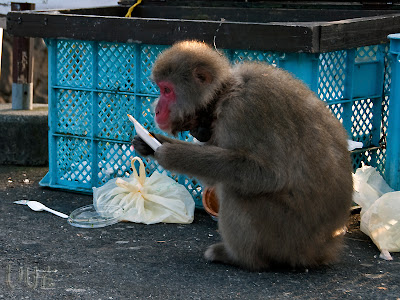 Another day, another garbage load, what an awesome life in the wild I have!

But of course those who were so quick to scream "animal abuse" at me and Kayabuki somehow missed that bit. That's OK, they're too busy watching stuff on YouTube and sending moronic emails to pay attention to anything else, I totally get that.

Now, that we have that out of the way, let's address your additional questions, shall we?

Of course NOT! If there were, no such abomination as that restaurant would exist. Not to mention cat cafes!

Of course NOT! If they were, there would be no such abominations as that restaurant. Not to mention zero whale meat for lunch.


You? You gotta be kidding! But if you try lower on the evolutionary ladder, you might get lucky. 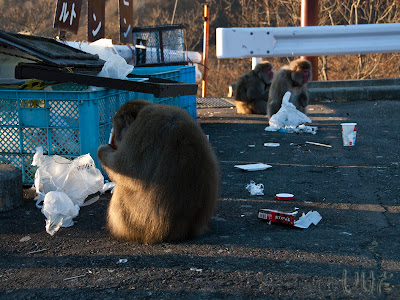 "Yeah, life in the wild is so awesome! I feel so sorry for those poor schmucks at Kayabukiya! They get nutritious food and the best vet care money can buy... pity them... Now... this garbage, on the other hand... delicious!"
Posted by 2cats at 3:39 AM