When you buy a Mac, you get all sorts of nifty (and not so nifty) bits of software with it. One of those bits is iMovie. This is the stuff I use to put together the videos I upload to YouTube. I do have a fancier software too - Final Cut Express, but iMovie is faster and easier, and for my purposes - works just fine. And besides, the thick user's guide and tutorial for Final Cut Express scares me.

Inside iMovie there is a little "music" icon. When you click on it, you get an option to add additional sound and music to your video. There are two choices for you: iMovie Sound Effects and iLife Sound Effects.

I normally use iLife Sound Effects. It has all sorts of stuff: canned laughter, jungle noises, street traffic sounds, and also short instrumental pieces of music. Now, mind you, "Apple, Inc." is listed as "Artist" for all of them. 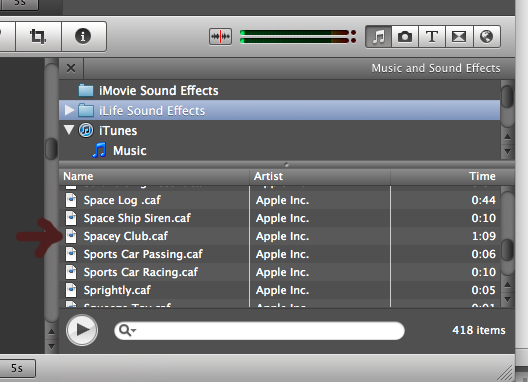 Last night, for my laundromat clip I used the bit titled "Spacey Club". The length was perfect for my video, just around 1 minute and 8 seconds.

So imagine my surprise when, after I uploaded the clip to YouTube, YouTube told me that my video "contains copyrighted third party material". This is not the first time it's happened with a sound effect from iLife. I've always successfully disputed such claims and YouTube withdrew it's "third party matched content" announcement on those clips. Normally, the process was very fast. I filled out a dispute form explaining the soundtrack came from iMovie, and poof! The claim was gone.

But now it's been over 24 hours and the claim is still there. That does not make me happy.

So, YouTube, now you do know. And I suggest you do something about it. This is not the first time it's happened. And it's getting tiring.

I plan to pursue this dispute until the claim is removed. Let's see how long it will take.
Posted by 2cats at 11:51 PM