So, you're in Malaysia, it's Christmas, and you have absolutely no clue how to celebrate it. You think and think, and you decide you'd really like to go to the beach. But you're in Kuala Lumpur. So you do the second best thing after going to the beach. You visit a mosque.

I mean, why not? Malaysia is a predominantly muslim country after all. It's easier to find a mosque than a church here.

But since you're in Kuala Lumpur, you might as well go to one of the grandest mosques out there - Masjid Negara - the national mosque of Malaysia.

And as it happens, that was exactly what I did.

I put on my culturally sensitive clothing (long skirt, long sleeved shirt, black socks), my friend Lina provided a headscarf and off to the mosque we went. 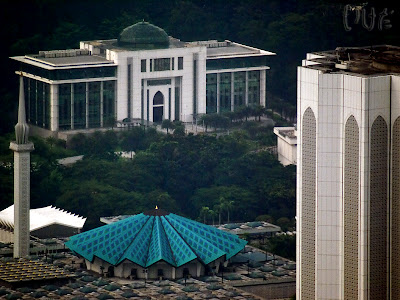 Here it is as seen through a bazooka lens from the Menara KL Tower.

The structure was designed by two Malaysian architects and one Brit in 1965. And yes, the roof looks like a blue umbrella. It wasn't always blue, though. Once upon a time it used to be pink.

The structure is quite big. it can fit 15 thousand people, though the guy inside claimed more like 22 thousand. Either way, that's a lot of people. And I just hope people with clean feet.

I didn't mind taking off my shoes, after living in Japan, I'm used to it. The tiled floor was pleasantly cool. If it was me, I'd go there to pray just to escape the heat. 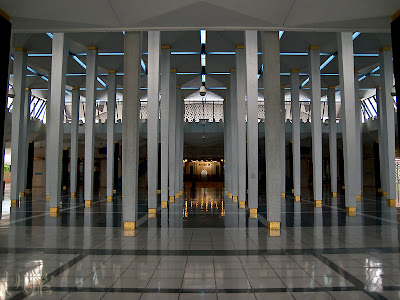 Tourists are welcome to visit outside of prayer times. But yes, you do have to dress appropriately: cover your arms, legs and head for women, and long pants for men. If you're wearing what most tourists are, still, no worries, there are rental coverings at the entrance.

Once inside I could take photos freely and nobody bothered me. The only place I couldn't enter was the prayer room. 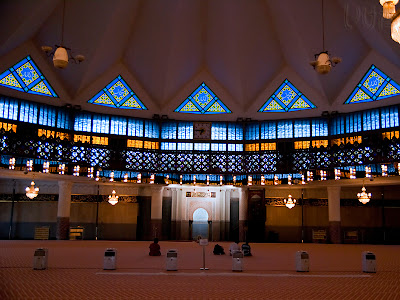 That was fine by me. I didn't go there to pray. But I do have to admit that this place had its own kind of hypnotic magic. And almost immediately after leaving, I found myself pondering going there again. 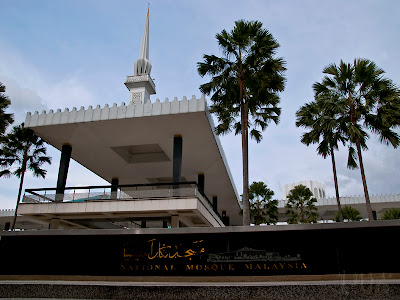 So yes, I can officially say I went to a mosque on Christmas day. How's that for speshul, huh? 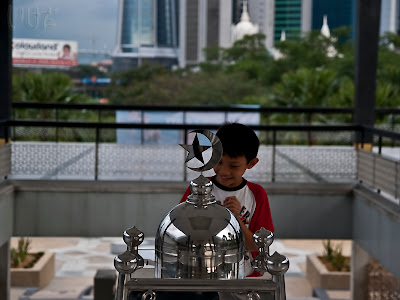 Adding to the collection box

And the views from the windows were spectacular too: 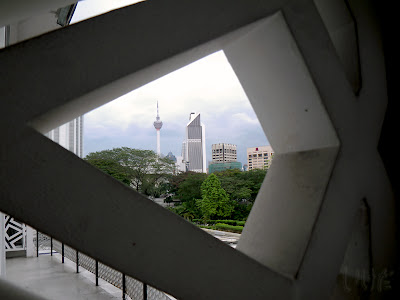 The "space needle" tower is of course the famous Menara KL. 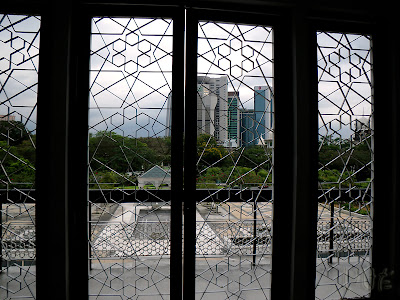 And that was on Christmas day. On the following day (Boxing Day, December 26th, whatever you want to call it) I went to a Hindu temple.

Ahhh... Malaysia.... There's something there for everyone.

This is also my entry to the absolutely fantastic Show Your World meme.
Posted by 2cats at 11:56 PM