What the heck is that giant mop?

Do you remember in our Miya Matsuri (1) video those huge mops carried by a bunch of drunk men (the fun starts at around 0:16)?

The guys kept shaking and waving that 15 meter mop up and down so hard that the handle was bending. That is precisely that same performance you can see at the Bonten festival (梵天祭り).

The name of this big mop is “Bonten" (梵天) - two bamboo stalks (trees? branches? stems?) are tangled with ropes and a fluffy plastic decoration is attached to the tip. The fluffy thing looks nearly the same as an American cheerleader’s pompom. The difference is the size and the number of pompoms. Oh, and one more thing, you cannot find busty young cheerleaders during the Bonten festival. Rather, a variety of participants (from young to old, girls and boys and everybody in between) wearing Happi (法被) are there to carry and shake Bonten. 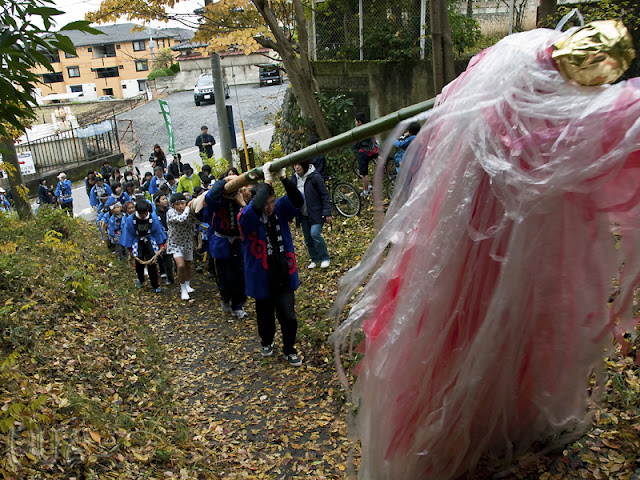 The men that appeared in the video are Ujiko members of Hagurosan (Mt. Haguro 羽黒山) shrine from KamiKawachi district (上河内地区) that was recently integrated into Utsunomiya city.

Why does the Bonten festival take place on a national holiday that is sort of equivalent to Thanksgiving Day? You may wonder… No??? Below is my answer. 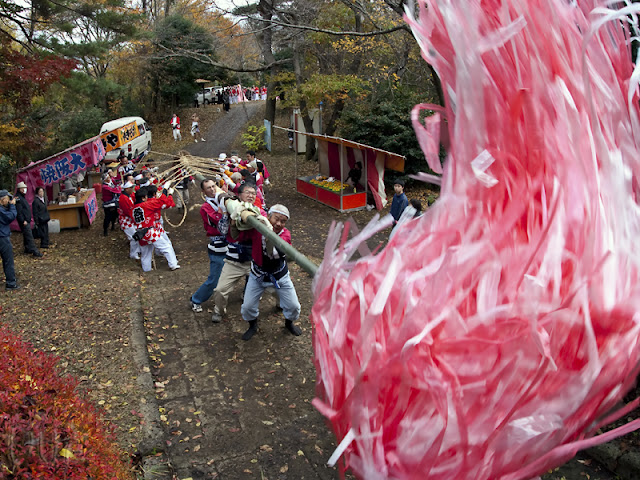 I am sorry to start with our traditional “first things first” rule. Sadly, it cannot be avoided. Sorry!
November 23 is one of the days when the Emperor performs a ritual Shinto ceremony, which is told to have originated during Empress Kogyoku's (皇極天皇) reign (A.D. 642-645).
The ceremony is called “Niinamesai/Shinjohsai (新嘗祭). It takes place after the harvest season and its main objective is to express our gratitude for fertility of five main crops (五穀) - rice, wheat, millet, bean, and Proso millet to the Shinto deities. Currently, the official ceremony takes place in Tokyo Imperial Palace (皇居).

In Hagurosan Shrine, the weird performance during the Bonten festival is dedicated to the enshrined deity, Ukanomitama (or Uganomitama) (宇迦之御魂神 in Kojiki, 倉稲魂尊 in Nihon Shoki). This deity is most famous as the enshrined deity of Fushimi Inari Taisha (伏見稲荷大社) in Kyoto. You may not be familiar with the name of this shrine, however, I am sure that you have seen a photo of a bunch of red torii gates making a tunnel. 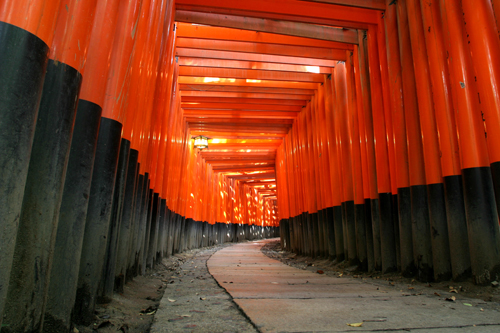 Image from Wikipedia
One of the “must-take-photo” scenes in Kyoto. The shrine was founded in 711. It has a close relationship with the Hata clan (秦氏).


Ukanomitama is a deity of agriculture of all sorts (five crops, and foods in general). In some areas of Japan, it is worshipped as a deity for prosperity in business… The sex of this god is controversial but Fushimi Inari Taisha considers Ukanomitama to be female. His/her nickname is “Inarishin/Oinarisan (稲荷神/お稲荷さん). A red torii gate and a white fox are famous symbols of Inari Jinja (= shrine) and there are over 40,000 Inari shrines all over Japan! Kyoto Fushimi Inari Taisha is the head of all Inari Jinja. 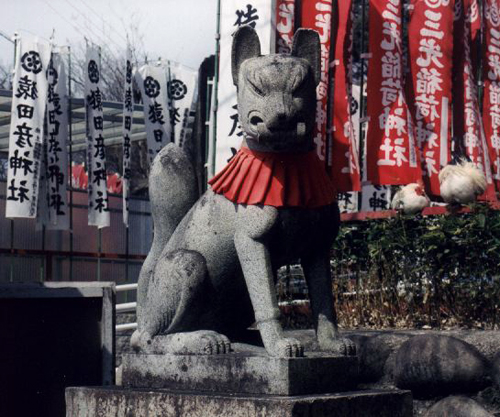 Image from Wiki. White fox is one of the symbols of Inari shrine.


“A little” bit about Hagurosan shrine


Location of Hagurosan Shrine in Utsunomiya.


History of Hagurosan shrine in Utsunomiya started around the year 1600. It began by transferring “part” of the Shinto spirit of Ukanomitaka deity originally enshrined at Ideha shrine (出羽神社), located in Shonai district (庄内地方) of Yamagata Prefecture (山形県). Out there, three sacred mountains named: Gassan (Mt. Moon/月山), Yudonosai (湯殿山), AND Hagurosan (羽黒山) had been worshipped for ages. Collectively they are called Dewa sanzan (Three Mountains of Dewa/出羽三山). The official “ENGLISH” website is here. Each mountain has its own shrine and enshrined deities. 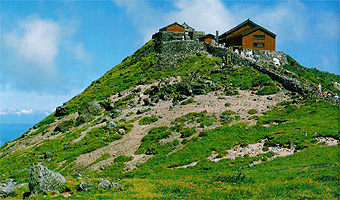 These three Mountains have the same characteristics as Nikko’s three sacred Mountains (Mt. Nantai, Nyohou, and Taro). In Nikko, Monk Sho-do developed the three mountains for worship, whereas in the mountains of Dewa the son of Emperor Sushun (崇峻天皇), Hachiko no ouji - Prince Hachiko (蜂子皇子, A.D. 542- 641) did the same.

When the Soga Clan's (蘇我氏) conspiracy against the regicide of his dad, Emperor Sushun, was successful, the young prince had to escape from Kyoto all the way to Dewa Province (出羽国) by sea. And just like in Emperor Jimmu's (神武天皇) migration myth, the Prince was also led by a three-legged holy bird and thanks to the bird, he could develop these three mountains as religious places. For those who are curious about the story of Emperor Jimmu’s encounter with three-legged crow, please click here.

As the name explains, Hagurosan shrine is located on the summit of Mt. Haguro (458m above sea level). Transferring the part of spirit of Ukanomitaka to Utsunomiya Hagurosan shrine was organized by Souen Fujiwara (藤原宗円)/ Souen Utsunomiya (宇都宮宗円, AD 1033 or 1043- 1111), the founder of the Utsunomiya Clan (宇都宮氏). He is believed to have been a priest at Futaarayama Shrine before he became the first Lord of Utsunomiya Castle (still controversial).

This is not the only Hagurosan shrine in Utsunomiya. We have another one nearby us. It’s in Tsuruta town (鶴田町)! And that’s where I visited on November 23. Although I haven’t seen any descriptions about its history and enshrined deity, I assume it’s the same as the other Hagurosan shrine…


Map of OUR Hagurosan shrine. It’s within 15 min walking distance from where we live. 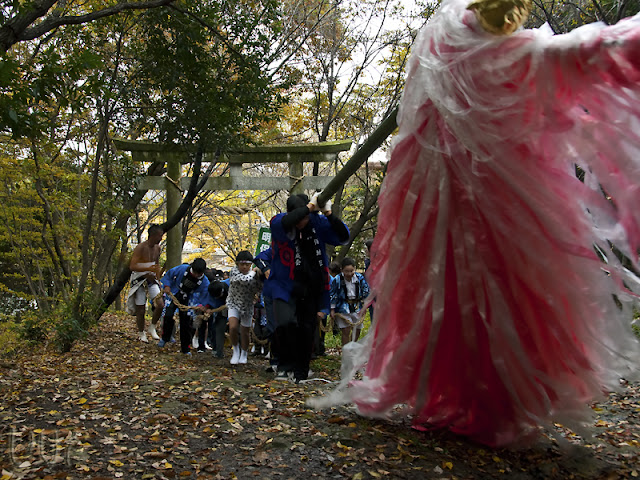