Kikusui festival did happen this year

Typhoon or not, last Sunday the Kikusui festival continued as scheduled. Though the weather was cloudy and mostly wet, the priests of Futaarayama shrine, shrine girls, mikoshi carriers, yabusame archers, horse handlers and everybody else who happened to be around braved the elements and did what they were supposed to do. 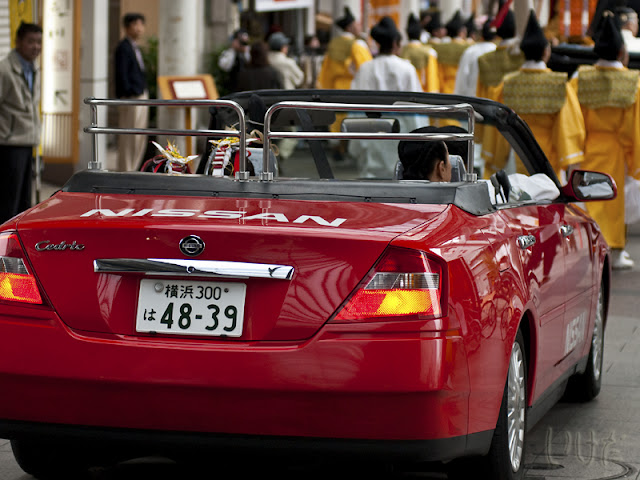 Who's riding in the car? One of the priests, two little girls who play a major part in the ceremonies, and an old lady, presumably the girls' handler.

These are my Kikusui reflections:


1. Why a red Nissan convertible? With Yokohama tags, no less? Are the priests at the shrine having a massive midlife crisis?


2. "One has to wonder how bowler hats became part of the traditional garb. They look like they all graduated from butler school." That comment was posted by one of my blogger friends - Oakland Daily Photo, and honestly, I could not agree more.

At around 2:35 one of the girls loses her slipper, but bravely continues the performance.


3. Mikoshi on wheels? That's cheating! But then again, I suppose that shinto priests have no rhythm, not to mention muscle, and would make lousy mikoshi carriers.

5. I cannot imagine yabusame happening on the streets of an American town. It would be any lawyer's wet dream. And frankly, I can't blame them. Getting trampled by a horse at a public event in order to get a multi-million dollar settlement is a fundamental American right.