Part 1 of the Kanuma Autumn Festival is here.


Among manners and customs related to folk entertainment, annual events, forms of faith, life, and occupations that have been inherited and still exist, 264 items are assigned, by the Japanese Government under the Act on Protection of Cultural Properties (文化財保護法), as Important Intangible Folk-Cultural Properties (重要無形民俗文化財).
Whoa! That was a mouthful.

In Tochigi Prefecture 4 activities are listed in the document, and the Kanuma Buttsuke Autumn Festival is one of them (assigned as an Important Cultural Property on February 20, 2003).
Here is the description listed in the database of the Agency for Cultural Affairs (文化庁). Sorry all of them are in Japanese only, no English…

Below is a brief translation of the Japanese description. Images are made or integrated by us at totally random intervals to stop you from falling asleep.


The Kanuma yatai activity is held during the annual festival at Imamiya shrine located in Kanuma city, Tochigi prefecture.

Kanuma city is located the mid-western part of Tochigi, flanked by Utsunomiya to the east and Nikko to the north. Since the early modern period, Kanuma was one of the Shukuba (宿場) - post stations along Nikko Reiheishi Kaido (日光例幣使街道) – subroute connecting Nakasendo and Nikko Kaido. 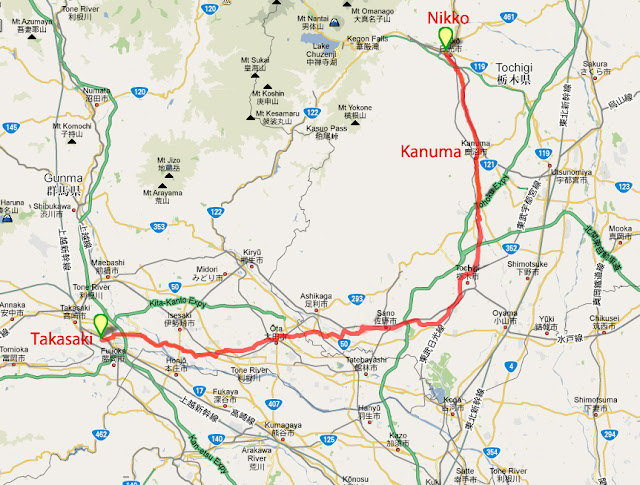 Nikko Reiheishi street. It is 113.5 km long starting from Kuragano shuku (倉賀野宿) - in Takasaki city to Imaichi shuku (currently in Nikko city). There are 21 shukus (stations) and Kanuma is the 18th station. (click on image to see larger version)


Kanuma used to be an important hemp gathering and weaving center. Hemp was grown and woven into fabric in and around the Kanuma district. The city is still a center of wood industry. Imamiya shrine is located in the center of the city and worshipped as Ujigami (氏神) among 34 districts located in the city center.

The annual festival at Imamiya shrine takes place during the second weekend in October and begins by dedicating yatai (wooden festival floats). Among the 34 Ujiko districts 28 own custom-made yatai and around 20 districts participate in the festival each year. 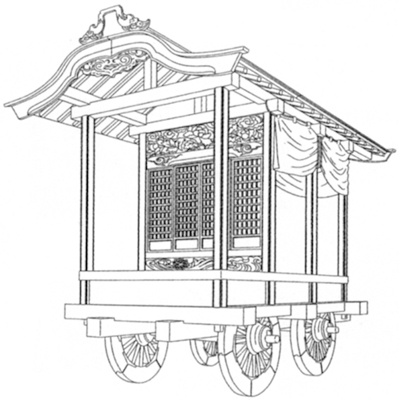 
The yatai in Kanuma is a single floor structure with four wheels. The yatai procession is accompanied by traditional music played by musicians located inside the cabin. Each yatai is decorated with magnificent sculptures and carvings partially covered with detailed metal engravings – in a style influenced by art designs and sculpture techniques developed by skilled carpenters who were involved in the construction of Nikko Tosho-gu (東照宮) and the Five Story Pagoda (五重の塔). 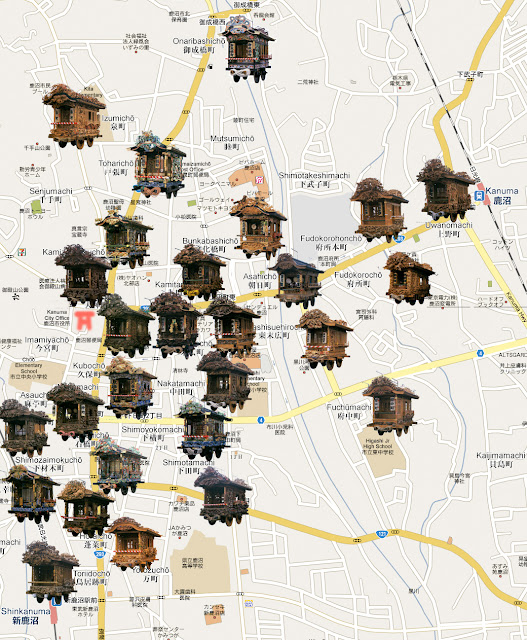 Schematic representation showing the affiliation of yatai to Ujiko districts. This year 27 districts participated in the festival. And yes, those are the actual yatai that belong to those particular districts. (click on image for larger version).


34 Ujiko districts are divided into four groups: Kami (上- upper), Shimo (下- lower), Tamachi Kami (田町上), and Tamachi Shimo (田町下組). On average 8-9 Ujiko districts belong to one group. The responsibility for organizing the festival is rotated annually among the four groups. In the group responsible for the festival in a given year, one district (determined by turns) is in charge of organizing the event and called Ichiban-cho (一番町- Number One Town). 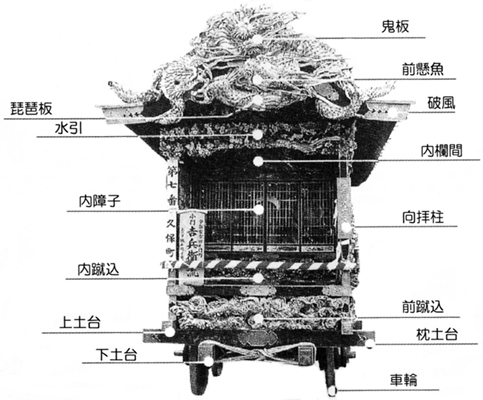 The Yatai festival beings with an event called "Enko Sai" (縁故祭 - relationship festival?) at Imamiya shrine on July 20th. It is a ritual ceremony in which the new organizing district takes over the responsibility of Ichiban-cho from the previous year’s one, with Shinto priests, the president and the vice-president of Ujiko members, accountants, committee members of Ichiban-cho (previous and current year), and chiefs of each Ujiko districts. (Yeah, celebrities and VIPs)

The next ceremony is buttsuke on the first Saturday in September. The ceremony is meant as a dress rehearsal of the Yatai festival. Fully assembled yatai do NOT appear at this time. Instead, each districts provides a concise version of a pseudo-four-wheel car and they get into the shrine with the accompaniment of a traditional orchestra.

This is an opportunity for the districts to show their willingness to attend the main festival this year. By going through this rehearsal, Ichiban-cho, the district in charge of organizing the main festival, can confirm which districts will participate in October. Then meetings take place over and over, until everything is scheduled, coordinated, and negotiated. 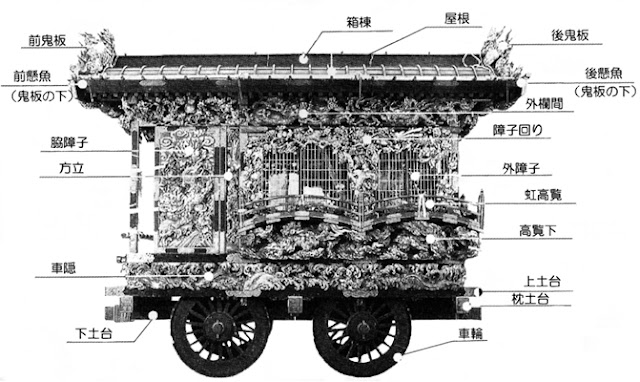 Rei taisai (the annual festival) in October begins with all the celebrity members described above getting together (in formal wear) and praying at Imamiya shrine early in the morning of the first day of the event. It is called "Asamiya Mairi" (朝宮参り - visiting the shrine and praying early in the morning). It starts off with Ichiban-cho’s prayers, followed by the remaining districts belonging to the organizing group of the year, and then - all the rest.

After singing a song and leaving its home district's territory, the yatai pulled by Ujiko members heads to the shrine to pray. When that’s done, it makes a clockwise turn by the shrine and returns home. The process is done before breakfast, around 7AM. Afterwards, the Chief Ujiko from the districts participating in the festival and the festival committee members get together at the shrine to participate in a ritual ceremony there. While this ritual ceremony’s going on at the shrine, each yatai starts to march within its own district and prepares for the procession to the shrine later in the day.

Here is a video of buttsuke (which takes place on the second day of the festival):

By the time a foreign yatai goes across another district’s territory to visit the shrine, the diplomats have to make a deal with other diplomats who belong to the “foreign” districts along the way to the shrine. All has to agree as to when and how long the yatai can travel across “foreign” districts. When the negotiations are successful, Ujiko members from foreign districts wait at the border, expecting the yatai to arrive on time. When the yatai goes across the border, foreign Ujiko members lead the yatai to the other border of the district. Prior to the negotiations, no yatai can pass through any foreign district. If you break this rule, your neighbor’s yatai will be heavily armed, like tank, next year. 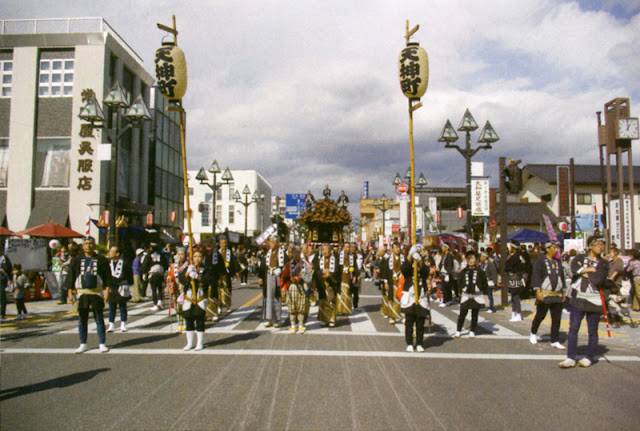 A flock of Ujiko members pulling yatai, waiting for the “Kurikomi” ceremony (image from the official city book).

There is law and order governing how all yatai get into the shrine (called Yatai Kurikomi: 屋台繰り込み). The first to go in is the yatai of Ichiban-cho. After passing under the shrine torii (鳥居), ohayashi (お囃子: musical accompaniment) is dedicated to the gods and the yatai team is purified by the priests with oharai (お祓い) – that thing that looks like a mop of shredded paper on a stick. When that is done, the yatai is moved to a particular spot on the shrine grounds and waits until all the Yatai Kurikomi (繰り込み) is completed.


When all the participating yatai are purified and parked, once again, all the celebrities get into the Haiden Hall (拝殿) – the main hall of the shrine, and have another ritual ceremony called “Houkoku Sai" (報告祭 - reporting festival). 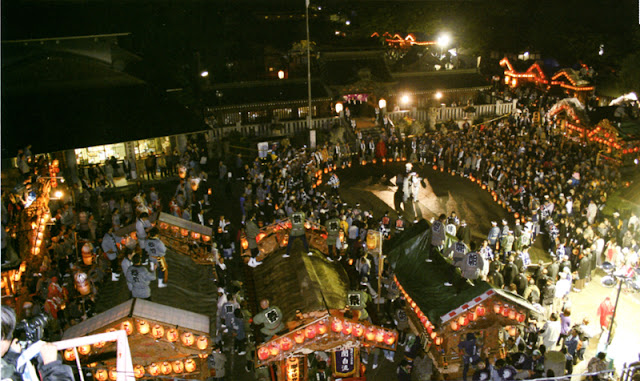 
In the evening, lanterns are attached to the yatai for illumination and ohayashi music resumes. The process called “Kuridashi" (繰り出し - getting out of the shrine and going home) starts when the sun is fully set. It begins with the Ichiban-cho’s yatai. When the yatai of Ichiban-cho leaves the shrine, a ceremony called “Teuchi Shiki" (手打ち式) - applauding ceremony takes place. The rest of yatai go home after the applause ceremony in the same order they went inside.


Here’s a comment on this event by the Agency for Cultural Affairs:

Since the festival is one of the typical characteristics of a traditional yatai ceremony, it is significantly important.


Damn, that was long and convoluted to translate. I realized that the description of the Kanuma Yatai festival covers only the events taking place on day one of the whole festival. Probably the events on day two are mostly to entertain and cheer people up.

Here's the video (lovingly filmed by Mrs Trouble) during the festivities on day two. Yes, the good people of Kanuma love Mrs Trouble (and she loves them back):


If you read Japanese, please visit the city's official site where all the events are described and illustrated with images.

And guess what? Utsunomiya mikoshi was also visiting Kanuma! Here it is - blocking the yatai passage. The Ujiko members must pay their respects to the mikoshi before allowed to proceed.

And of course I filmed it: