This is a Japan Blog Matsuri entry for August. This month's matsuri is hosted by Through Eyes From Afar and the theme is Nature and Japan.

Yeah, we got that covered, that's for sure.

Now read on, and then visit Through Eyes From Afar to check out other Japan Blog Matsuri entries for August.

Let me start off by saying that I love mountains. I really do. I just don't like to climb them. Why? Going up is the easy part, that I can do, no problem. It’s the going down bit that is always a circus. And today was no different.

What was I doing climbing a mountain today? And not just any mountain, but Mt. Nantai (2486 meters above sea level) – one of the most sacred mountains in Japan.

And not just any old climbing either. Oh no! We couldn’t be that mundane, now could we? Because if you’re going to do something you don’t especially like, you might as well go all out and do it like it’s meant to be done, right? Do it once but do it right.

And that’s why we were climbing Mt Nantai at night. 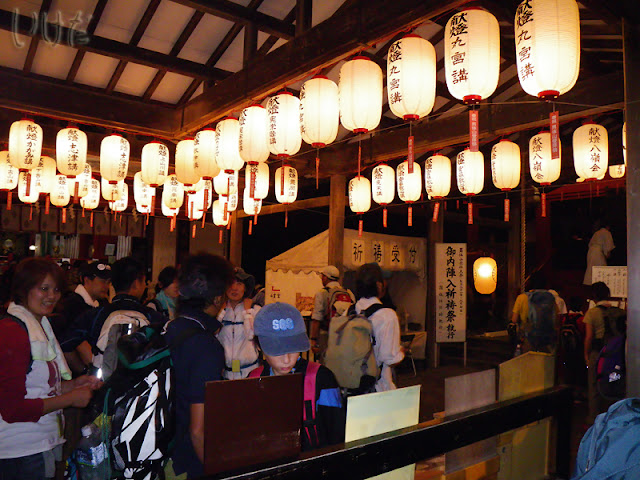 Waiting to pray before the climb

Yes, it was Tohaisai time – the sacred nighttime climb to watch the sunrise from the summit. The full name is: 男体山登拝講社大祭 – Nantaisan Tohai Kosha Taisai and it’s held annually on July 31st until August 7th.


The event is organized by Futaarasan shrine in Nikko, and as the name suggests – you climb the mountain and you pray. The only difference between this climb and an ordinary hike is that this one starts at midnight, you climb in the company of other worshippers, and you do it by flashlight. 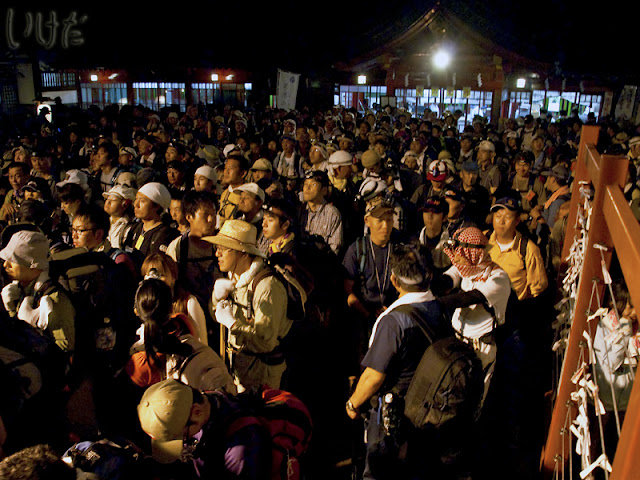 Waiting to start the climb


And once at the top, you can pray while admiring the sunrise. That is, if the visibility is fine. This morning it was foggy - well, you are, after all, IN the clouds. Today, before the sun rose properly, the visibility was an astounding 10 meters.

The whole thing starts at Futaara shrine in Chuzenji (that's still Nikko, in case you're wondering). There’s a daytime festival that inaugurates the climb, then you pay 1000 yen, and off you go. 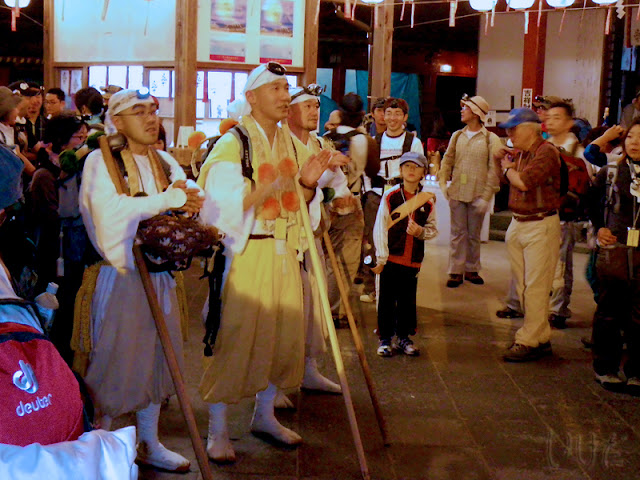 Praying before the climb

By the way, notice their clothes? They're more like Buddhist than shinto priest's clothes. Why? That's how it was back in the olden days, there wasn't much distinction between those two religions.


Once when all the initial prayers are completed, at the stroke of midnight the gate behind Futara shrine is opened and it's showtime. The climb should take about 4 hours, so you arrive at the summit just in time for the sunrise. 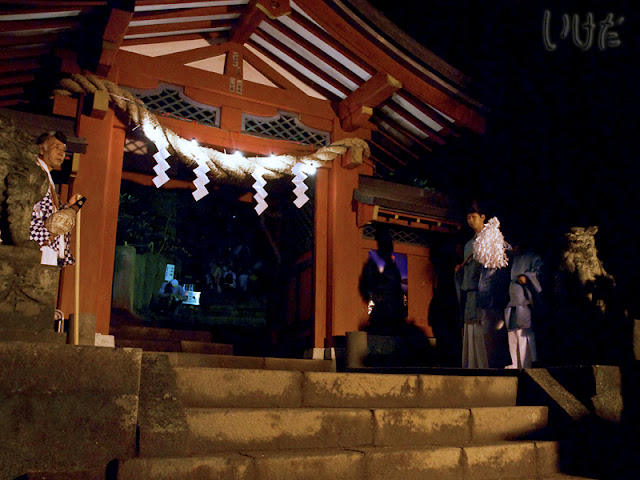 The gate is open, time to go.

Now, I don't know if it’s just me, but man, it was hard. It was also slippery, dark and muddy. On the other hand, I’m glad it was dark. If I saw what I was climbing over, I’d probably never even attempt it. And as it was dark, and the only light came from my and other participants flashlights, I just had to focus on what was in front of me and blindly go forward.

Once you start, there is really no option to stop. You climb in a huge group, so any slacker causes a jam. This year there were about 2500 climbers (as reported by Shimotsuke shimbun). We were divided into smaller groups of about 500 people. Hint – if you’re planning to do this climb, elbow your way into the first or second batch of people at the start. Otherwise you’ll never reach the summit in time for the sunrise. Or you’ll have to climb like a mad man. 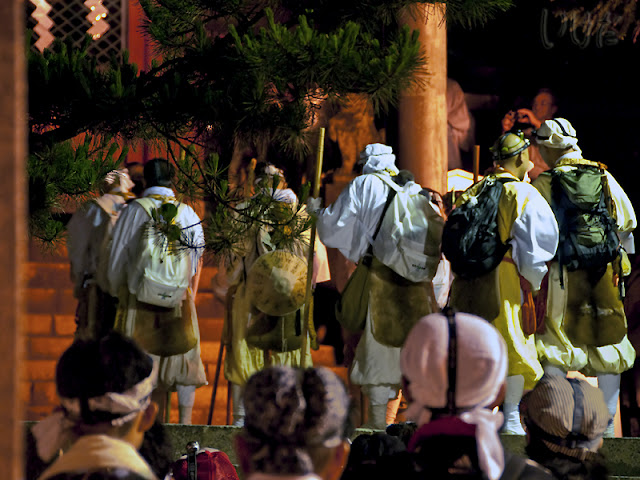 You are led by shinto priests in Buddhist clothing

Actually, today some people did climb like mad men. The fastest guy reached the top in about 90 minutes. Now, for comparison, it took Dr. Trouble 4 hours, and it took me 4 and a half. And Dr Trouble is a fit beast that can jump over rocks like a monkey. I’m not fit, but I’m very determined. And even though at the 75% mark it looked like I might want to give up, I gave myself a kick in the butt and pushed on. Let’s just say that Dr Trouble never expected to see me at the top. (Jerk, after all these years, he should have known me better by now.) 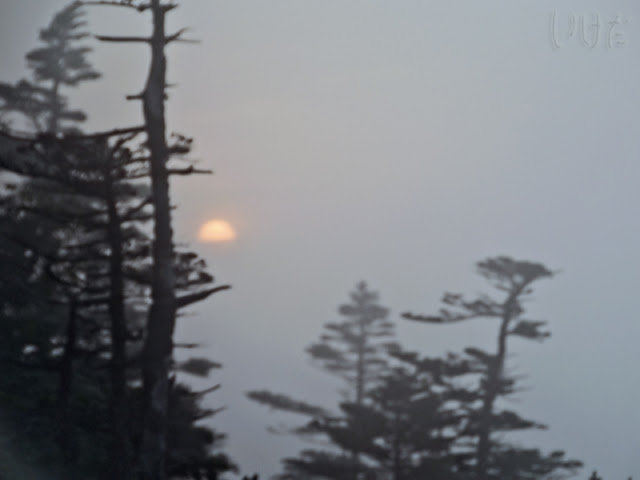 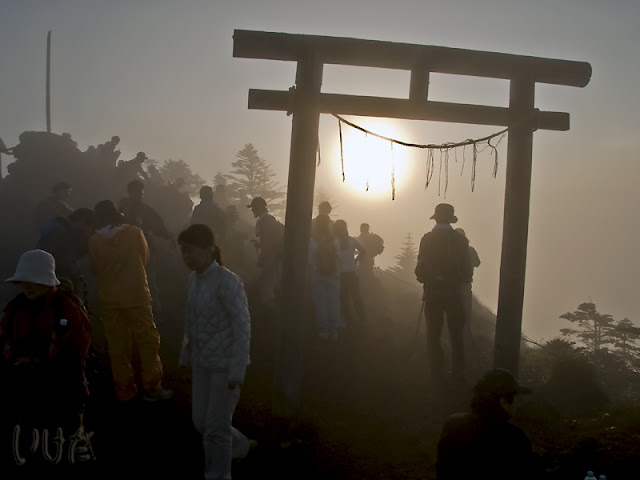 Watching the sunrise from the top of Mt Nantai 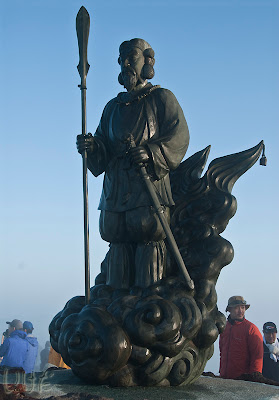 You'd think there would be a statue of Monk Shodo at the summit, but no. This actually looks like Okuninushi - the god of Mt. Nantai.

Going up is easy, it’s the down part that always kills me when mountains (or anything elevated, including ladders) are involved. Let's just say that going down, at least for me, was pure hell. It was already daytime and I could actually see the way. And that was the main problem. I scratched my head and thought to myself, often out loud, “How the hell did I get up THIS thing?” 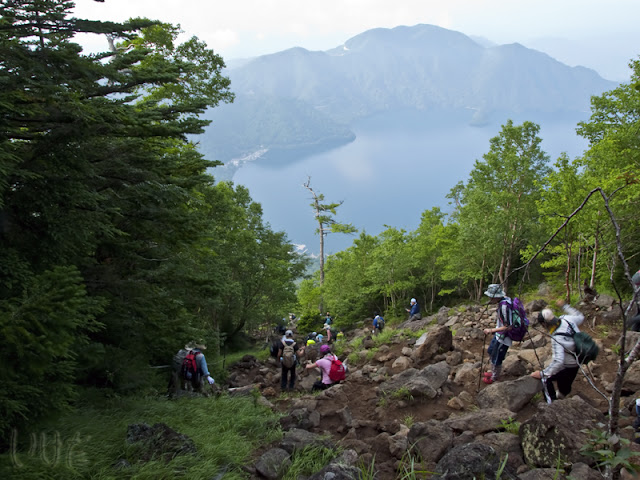 Going down, lake Chuzenji in the background

And then the inevitable happened. I fell and twisted my ankle, skinned my leg and smashed my knee. How did I manage to do that when for the most part I was sliding down the mountain on my butt is anybody’s guess.

Bottom line, when I reached the 40% mark going down (that’s where the access road starts), the descent for me was over. Dr Trouble was waiting for me there (didn’t I tell you he can jump like a monkey?) and when he overheard people coming down complaining that a foreigner caused a jam, he knew something was up. 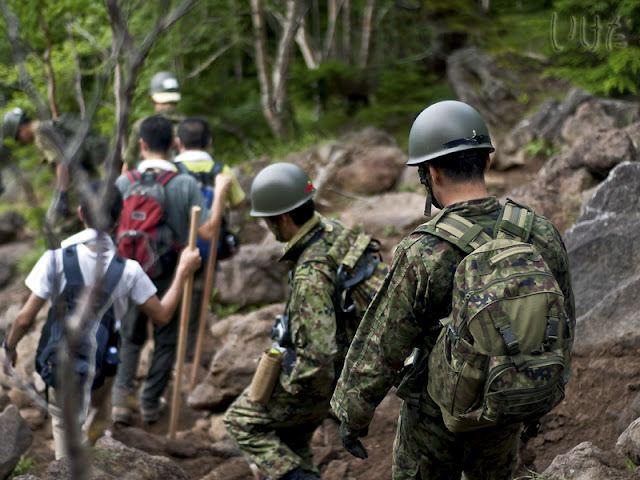 Soldiers supervising the descent, and assisting when necessary. They also do the cleanup, so please be kind and don't litter!


When I hobbled down, he dragged me to the Red Cross van (even though I was fully prepared to hobble all the way down to Futaara shrine) where the paramedics took one look at my leg and told us we’re riding the rest of the way – that I wasn’t going anywhere on this foot and would be stupid to try. And that someone down at the shrine was going to examine it and administer first aid. And that they did. Their diagnosis? Sprained ankle. One of only four injuries today, which for 2500 people, is not bad at all. 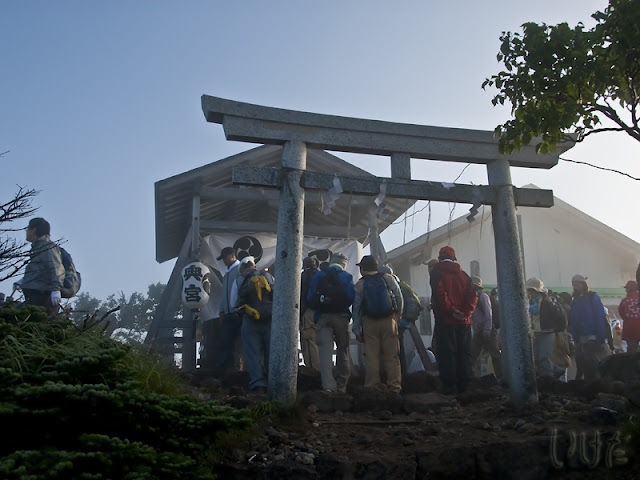 Praying at the summit


If you want to participate in Tohaisai, here are some things to keep in mind: