Kayabuki in Utsunomiya - Where Waiters Are Monkeys

We were bored today and thought that seeing a couple of monkeys in goofy costumes would be a swell idea. No, we didn’t go to a cosplay event, we went to Kayabuki.

Kayabuki is a restaurant (actually, an izakaya, to be precise) in the Miyukihoncho part of Utsunomiya (address: 4688-13 Miyukihoncho, parking available) where two monkeys work as waiters (or waitresses – sorry I didn't feel like pulling down underpants). Their names are Yacchan (presumably a boy) and Fukuchan (presumably a girl, though I’m not sure). 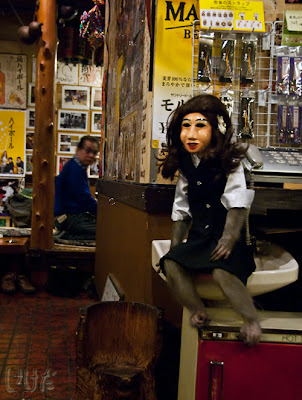 Tonight only Fukuchan was on duty. And let me tell you, the masked and wigged monkey in the mask was a very creepy sight.

And if not for those monkeys, there would be no reason for Kayabuki (phone: 028-662-3751) to be famous. It’s a less-than-average izakaya. Somewhat dirty and grungy, but not enough to be a skanky dive. The food is OK, but just barely this side of OK. The service is non-existent. No wonder then that when a British TV crew visited Kayabuki some time ago, some customers said that the monkeys were actually better waiters. At least they brought you things, which cannot be said about the human staff. 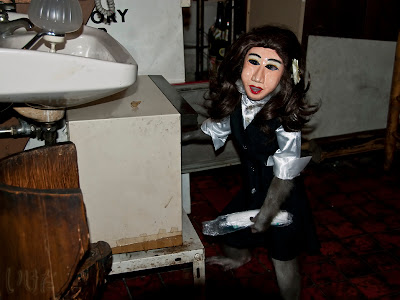 Do you want a hot towel?

We were being purposely ignored for about 30 minutes. So much effort went into that ignoring that I was beginning to worry that mamma-san and her helper might sprain their necks from turning their heads to avoid looking at us.

But when we finally managed to place our order (teppanyaki x2 and oolong tea x2), the food arrived relatively quickly. Mamma-san’s helper for some very strange reason insisted on explaining the menu to us in English. Even though Dr. Trouble was answering her in perfect Japanese. 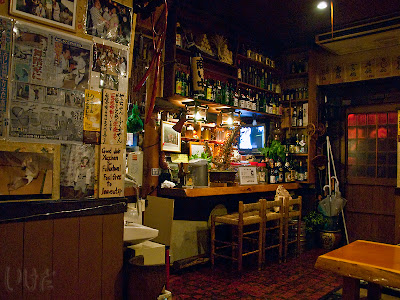 Oh yeah, the menu… ignore the fancy menu posted on the wall. The one with stuff like boar, deer and duck. There’s none of that, that menu is just for show. Today’s choices were: teppanyaki with chicken and tofu with meat. Plus the usual sides of kimchi, gyoza and tempura (which consisted mostly of onions).

Tonight we were treated to only one monkey, Fukuchan. And thank goodness, because that was enough to creep me out. The monkey did her schtick of delivering hot towels for about 30 minutes and then disappeared behind the bar. 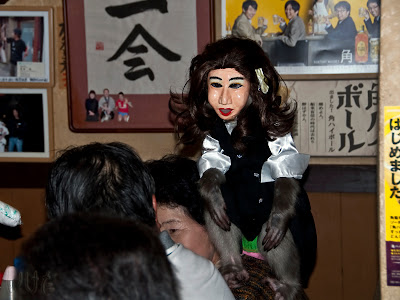 Fukuchan getting friendly with customers

That was our cue to pay and leave. Oh yeah, speaking of paying… Our bill should have been 2200 yen (teppanyaki 900yen x2, plus oolong tea 200 yen x2), but we were charged 2600 yen and no explanation was forthcoming as to why. I was planning to leave a tip for the monkey (the sign on the wall asks you to do just that) but after being overcharged 400 yen, I changed my mind. 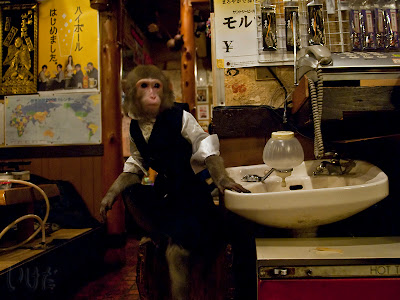 Conclusion: it was interesting for one night, but we won’t be back. I can ignore nasty attitude (god knows, I have plenty of that myself) but I won’t put up with being ripped off.

Here's a short film, sorry about the cellphone camera quality:

PS. And you better not mess with Yacchan, he is 4th dan in karate: 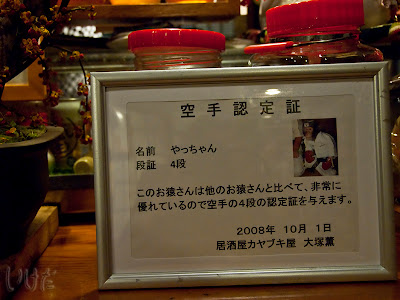 Still, it's a creepy place, definitely not my favorite. I much prefer this - aaaahhhh, now THIS is paradise! (Click on the link ONLY if you love cats!)
Posted by 2cats at 8:54 AM