I had been hearing stories about a mysterious Holocaust museum in Tochigi prefecture for quite a while. I always filed them in my mind as: “interesting, need to learn more” and then promptly moved on to more pressing issues of the day, like “buy more cat litter” or “should I do the laundry now or wait until tomorrow.”

Then last week I was reading something about Chiune Sugihara and clicked on a link leading me to the Jewish Community of Kansai website. JCCKobe immediately struck me as a very friendly bunch (too bad I live so far away!) and I started to explore their links. Among the usual “Mikvah”, “Shabbat” and “Your Support” there was something titled “Judaica in Japan: Places”. I wasn’t even thinking about the mysterious Holocaust museum when I clicked on the “Places” link. I’ve always assumed our aunt simply either misheard or misunderstood the stories - her English is not that good and she has very selective hearing.


So imagine my surprise when on the JCCKobe site I saw a link to the “Auschwitz Peace Museum” in Shirakawa City, Fukushima prefecture. 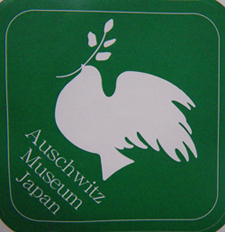 Fukushima, Tochigi – it’s easy to confuse the two, they’re right next to each other.


That was last Thursday. Today, Sunday, we just came back from a trip to Shirakawa City.

If you think that backwaters Fukushima prefecture is a very odd place for a Holocaust museum, you are absolutely right. It is.

Getting there is a major pain. The museum’s website is in Japanese only. In Shirakawa, or rather in Shirasaka, where the museum is actually located there are no signs with directions posted, and the only information board by the turn off from the main road is, again, in Japanese only. 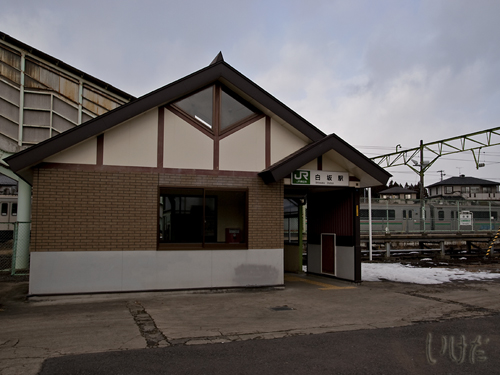 Luckily, the place is only about a 5 minute walk from the Shirasaka train station – just go straight and when you see a blue information board at the bottom of a hill on your left, turn left. Be careful, it’s a tiny road! If you see koban (police box) on your right, you just missed the turn. (Driving directions at the bottom of this post.) 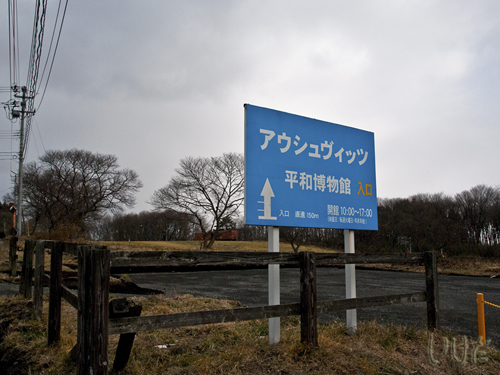 Yes, that’s the official name of the place – Auschwitz Peace Museum Japan, and yes, it is about THAT Auschwitz. And if you haven’t heard about the Auschwitz-Birkenau death camp, you need to stop reading this blog and go back to school, and fast.

The museum itself is tiny but definitely worth a visit. What’s inside is in such a stark contrast to the pleasant surroundings and the cozy location. You will begin by watching a 20-minute movie. (It used to be two movies, one Japanese and one French, but now only the Japanese film is shown. The French production was so graphic that museum’s visitors actually complained.) 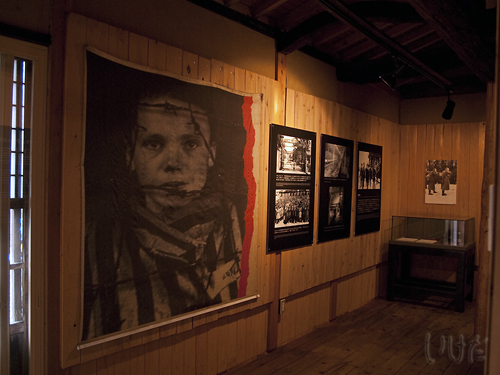 Inside the musuem.
(Technically, visitors are not allowed to photograph the exhibits, but we asked nicely, and since I became their very first official Polish supporter, the permission was granted.)


The collection of photographs and artifacts on display is small but appropriately moving. All items are on more or less permanent loan from the Polish State Museum Auschwitz-Birkenau.

How the museum ended up there is actually an interesting story.

You see, it all started as a project set up by Shinshin AOKI (青木進々). He visited Auschwitz while working in Europe and the experience moved him so much he decided to organize the Nationwide Auschwitz Memorial Tour “Auschwitz Engraved in Our Hearts” in Japan in 1988.

In 1983 the official Polish state museum at Auschwitz loaned some items to a certain organization (not sure of the name) located in Kurose town (Hiroshima).
Kurose was a sister city of Oświęcim (that's the Polish name of Auschwitz) and because of that wanted to build a branch of the official Polish museum and display the items there.

I said “was” because in 2005 Kurose was merged into Higashihiroshima and no longer exists as an independent municipality.

Anyway, back to our story. Due to severe budget trouble, Kurose’s proposed plan never came to fruition. Needless to say, the Poles were mighty pissed and wanted the objects returned. That’s when Mr. Aoki appeared. He begged the Polish officials to let him handle the matter. And that’s when he set up the traveling exhibition.


The exhibition was displayed 110 times and eventually found a “permanent” home in Shioya (between Nikko and Yaita), Tochigi prefecture. (The aunt wasn’t lying after all!)

In Shioya, the museum opened on April 16, 2000. It was housed in a building owned by a construction company and which from the outside resembled the harsh exterior of an Auschwitz bloc.


Shortly after bringing the museum to Tochigi, Mr. Aoki was diagnosed with terminal cancer of the esophagus. And in 2001, the owner of the property on which the museum was located decided to sell the land. That’s when NHK (Tochigi branch) did a program about the museum and its imminent end and a group of very determined people stepped forward to save it. 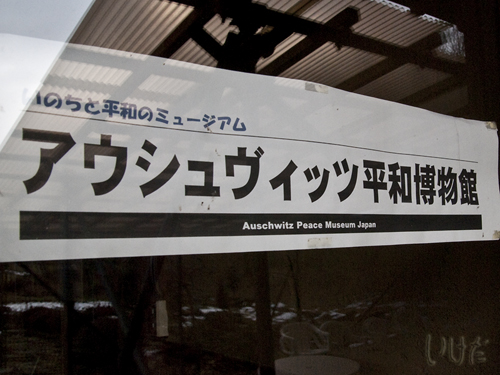 First, a new location was needed. A small farm (about 20 thousand square meters) in Fukushima prefecture was donated. Then, a new building was needed. A 200-year old house in Ibaraki prefecture was donated. Then, people and equipment were needed to disassemble the house in Ibaraki, move it to Fukushima and reconstruct it at the new site. A construction company owner from Nagano donated his time, expertise and money to move the house and 200 volunteers worked to rebuild it in Fukushima. The JR East Labor Union donated the two freight carriages you can see on the hill and built the train track to set them on.

In April 2003 the Auschwitz Peace Museum Japan opened in its current location.


The museum is its own non-profit entity not affiliated with any specific organization and has no corporate links. Its day-to-day operations are handled by Mari OBUCHI (小渕真理) – director and Eiji AZUMA (我妻英治) - curator. 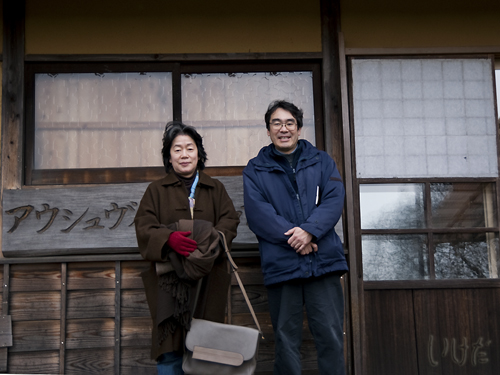 
Mr. Azuma was kind enough to spend some time with us today and answer our questions. He speaks good English and even if you can’t utter a word of Japanese, you should have no trouble communicating with him. He said he hadn’t been using English enough (most, if not all, of the museum’s visitors have been Japanese - so far), so by all means, please give him a chance to practice. 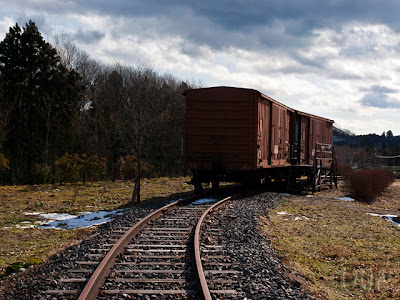 What else is there to see? In the two freight cars there is a disturbing exhibit of drawings (excellent reproductions) done by Polish school children in 1946 depicting their war memories. 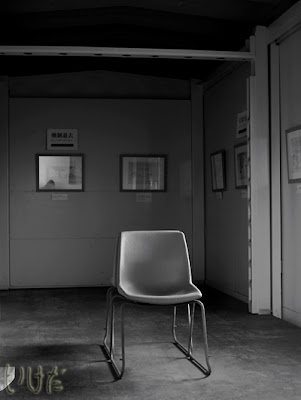 In a little brick house by the road, there is a section devoted to Anne Frank (even thought she died in Bregen Belsen, not in Auschwitz).


The museum also organizes an odd event every once in a while.
The next upcoming event – ice candle lighting to commemorate the International Holocaust Remembrance Day - will take place on Saturday, January 30th, 2010 starting at 5PM.
The actual Remembrance Day – the day when Auschwitz was liberated by Soviet troops is of course on January 27th. The event is free, just bring your own empty milk (or other drink) carton to make an ice candle. Don’t worry, the staff will help you! 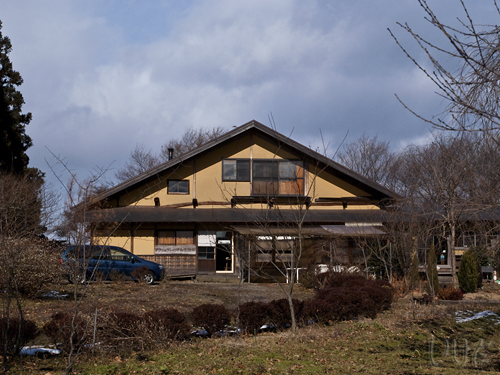 Auschwitz Peace Museum from the outside

Prices: 300 yen children, 500 yen adults, group discount for more than 20 people. Or, for 3000 yen you can become an official supporter with a free yearly pass.

Hours: 10AM to 5PM, closed Tuesdays and during New Year’s Holidays. If Tuesday is a national holiday, the museum is open, and then the following day it’s closed.

Driving directions: from Tohoku Highway exit at Shirakawa IC, take route 4 (go south) until route 184 appears, turn left onto 184 and follow it until you see a large pond on your right. Make the first right after the pond. You’ll see a police box on your left and a blue information board (about the museum, in Japanese) on the right. Turn right by the information board and go up the hill.


PS. And our entry about the Ice Candle ceremony (aka Holocaust Memorial Day 2010) is here.