How I learned to care about travellers with disabilities...

How people with disabilities travel, was not something I thought much about. True, there was occasional pity, maybe on a train in Tokyo, or on the steps from the metro in Paris. The only time I paid any attention at all was at the airport, when the announcement invited “passengers with disabilities and those requiring special assistance to board now.” A couple of shaking grandmas, or an occasional young person, in wheelchairs pushed down the corridor by oblivious airport staff. As long as they were not screaming toddlers and sat next to me, I didn’t care.

Then I went to India… And everything changed. A close encounter with an Indian sidewalk left my legs covered with bandages the size of hockey pads, and my hands resembling baseball gloves. While I could take a few wobbly steps on an even surface, stairs were out of the question. I found myself sitting in an airport wheelchair, being pushed around by an oblivious airport worker. Suddenly, I started to care.

The bus ride from the gate to the plane was uneventful. I was very efficiently loaded in by two guys and wished a pleasant journey. We arrived at the aircraft when a handsome young man appeared, and in a true Bollywood style, he scooped me into his arms and carried me onto the plane. He sat me down and an equally handsome flight attendant took over. Damn, what I want to know is where Kingfisher finds all these good-looking men?

In Chennai, the process was repeated in reverse. A Kingfisher ground employee (sadly, not as handsome) retrieved my checked-in luggage, and zoomed me over to the international terminal. He refused a tip, and wished me a pleasant journey. My bags and chair were handed over to an oblivious Chennai airport worker. After banging into a couple of unsuspecting passengers, he slammed me into the check-in counter. Well, at least I got to skip the line…

In a similar fashion, we breezed through the immigration and security lines, while hordes of tired, sweaty people started at me with hate in their eyes. At the gate my handler extended his hand and announced, “tip!” He looked with disgust at the 5-dollar bill in my hand.
“Sorry, I’m all out of rupees.” He grabbed the money and disappeared.

The flight to Paris was hell. The Air France flight attendants would not let me use the bathroom located 2 meters ahead (“First class only!” one of them barked), making me hobble the length of the plane to the back.

In Paris, I was told I missed my connecting flight. The next flight to Stockholm was too late for my Swedish connection.
“Wait! Can’t you fly me through Amsterdam?” I pleaded.
“No madam. Wheelchair passengers must go directly, airline policy,” a bored dude manning the transfer desk at CDG said and threw my boarding pass at me.
“What about my domestic flight? If I go through Amsterdam, I’ll make it!”
“Not my problem,” he said and blew his nose.

I was deposited at my gate, and with 6 hours to kill, decided to explore a little. Sadly, the shopping area was not designed to accommodate wheelchair passengers. Go to the food court instead? Yeah, try again! While there was an elevator, the food court had an additional step, which proved impossible to conquer. The bathroom? The handicapped stall did have enough room to maneuver, but all the handles and dispensers were positioned with mega-giants in mind.

A few years later, it was time to board.

“Can you walk down the stairs?” a woman checking boarding passes asked. Sure lady, and I’m just sitting in this wheelchair for shits and giggles. She sighed and called for assistance. We rode a special handicapped van to where the plane was parked. And then, there were the steps again, this time - no handsome Bollywood look-alike to carry me up. 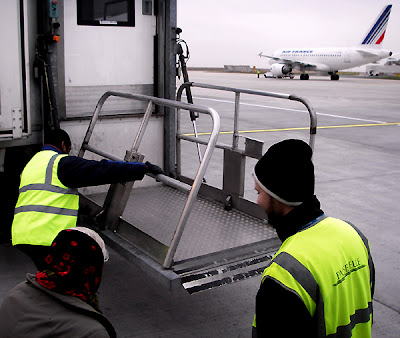 “Elevator truck. We need an elevator,” my airport handler screamed into a walkie-talkie. He wanted to know why a healthy looking young woman couldn’t brave a flight of stairs onto the aircraft. I lifted my long skirt and showed him my legs. One of the hockey pad sized dressings was soaked with blood. 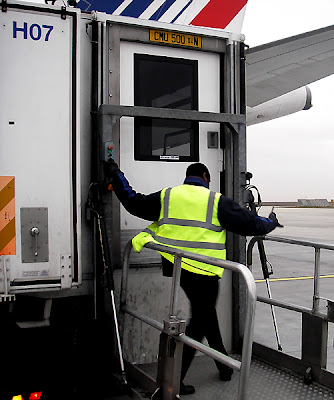 “Merde!” he yelled into the walkie-talkie some more.

Other passengers finished boarding. And we waited. And waited. 50 minutes later, the elevator truck arrived. A flight attendant opening the back door rolled her eyes upon seeing a seemingly fit young woman in a wheelchair. I felt like giving her the finger. Other passengers looked at me with disgust while I hobbled to my seat. Somebody was complaining about the delay. Somebody else bitched about missing a connection.


“Cripples shouldn’t travel,” a man in a fancy business suit said in French to a woman next to him.
"And assholes shouldn't fly," I responded in English and gave him the finger.

And all the way to Stockholm I marveled at how disabled travelers manage to move from point A to point B, and still smile and look gracious upon arrival.